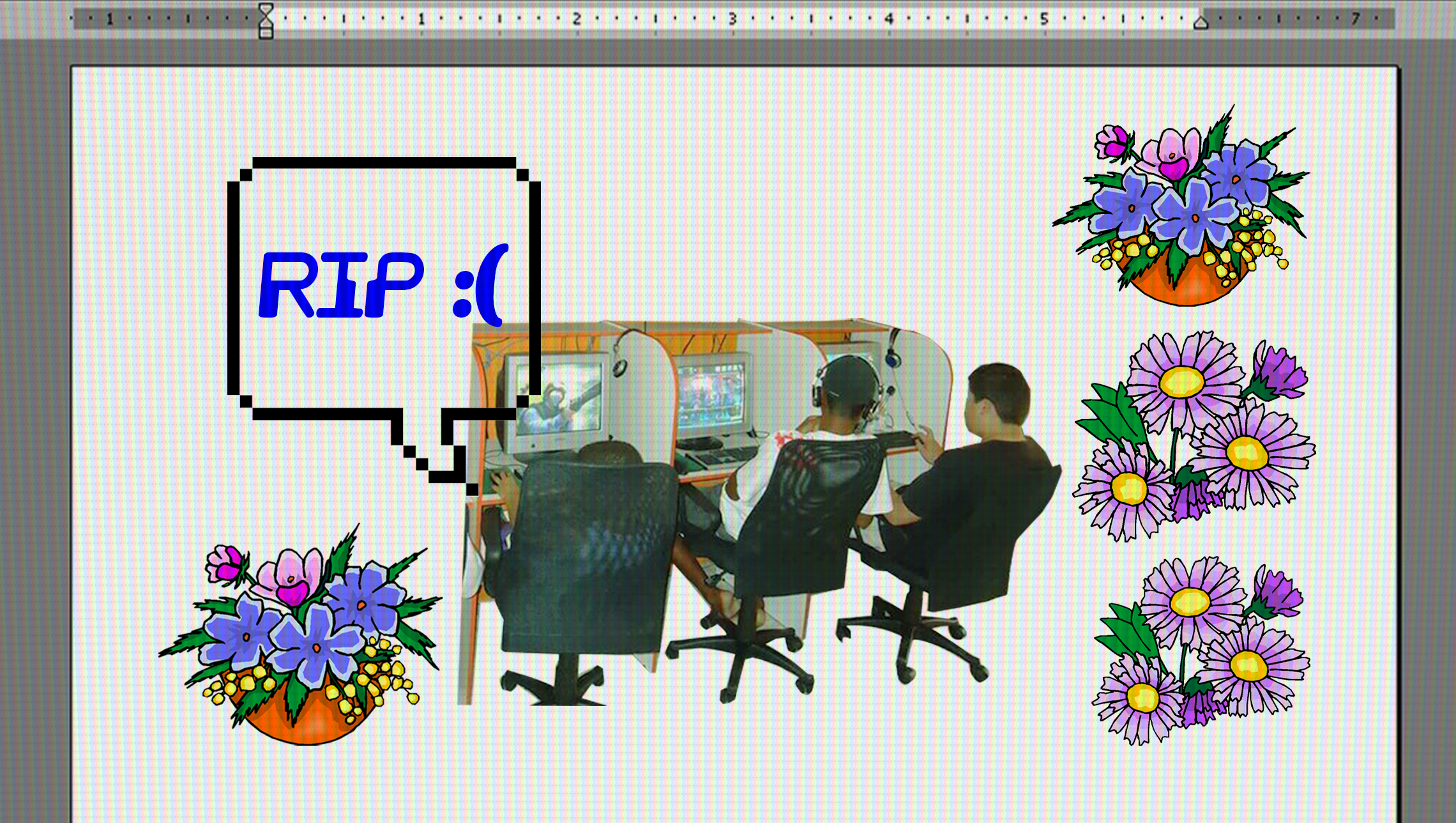 We all know that LAN cafés, especially the ones of our youth, were dank, dismal, dingy affairs. So then why do we miss them so much? Chan Khee Hoon delves into the dying out of Singapore’s LAN cafés, and recalls how there was so much more to them than the smell of fast-food and student-y sweat.

Imagine the stale scent of greasy, processed fast food wafting out from half wrapped packaging, while rows of teens stare intently into the screens, their hands moving jerkily with the seemingly haphazard motion of the mouse. The room is almost completely dark, save for the light from the screens. It is mostly silent. Then a chorus of blood-curdling screams erupts from one group, as the game reaches its crescendo. The sweaty teens became increasingly and visibly flustered. Whoops of excitement and/or exasperation then follow. It all ends with players congratulating each other for a round well played.

“The most popular LAN shop I frequented in Singapore in the early days was Cyberia, which was a dark dingy place up top of Far East Shopping Centre, next to a golf shop,” remembers Chia Jun Shen, a once-avid LAN café-goer. “The only light sources were from the computer screens and the fridge that sold all sorts of sugary drinks to keep young kids like us going.”

Very much a staple of the burgeoning gaming scene of the early ‘00s, shops like Big-O Gaming and aforementioned Cyberia were some of the more popular haunts among students, and have been around for at least a decade. And unlike the upscale, Razer-equipped gaming emporiums of today, the LAN cafés of yesteryear were grimy, tatty spaces that were dimly lit, while smelling distinctly – unpleasantly – of shoes, sweat and leftover food. McDonald’s, especially.

“I remember sometimes there’ll be food or snacks left at the table when I’m at the computers or whatnot,” recalls Au Shen Ru. Meanwhile, Derrick Wong remembers once being blamed for “breaking the computer” when he asked for help with a crashed computer. “A lot of the LAN shops back then were very basic without high-end computers. They were adequate for running the games, but when more games that required better graphics came out, it would lag or crash.”

But back in the early days of personal computing, it was that or go through the agonising exercise of taking turns with a sibling or parent to use the sole family computer. And with rates pegged at around $2 per hour, LAN cafés became a necessary choice for many students.

So even though the surroundings were unsanitary and the headphones would be uncomfortably moist and sweaty from frequent use, LAN cafés were where the kids would flock – to spend a few hours mindlessly gunning away at on-screen foes with a party of friends. Many even opting to play truant just to squeeze in more hours of gaming (or, more likely, to benefit from the cafés’ off-peak discounts).

Because here was where you could play the newest videogames – with friends too! – over a stable internet connection that wouldn’t disconnect whenever someone picks up the phone. “LAN shops were all the rage because internet connections were via the phone line, and internet gaming was not a thing yet, because your damn game would get interrupted every time someone called,” says Derrick. “The lag on a 56k Modem was rage-inducing as well. You can imagine that playing a first-person shooter with your friend with almost no lag was a huge thing.”

Thus, the LAN café also emerged as a place where many friendships were forged and strengthened. The means to communicate and coordinate in real time—that is, hurling vulgarities and spitting at the screen as your team was suffering a crushing defeat, or enthusiastic fist bumps over a shared victory—isn’t an experience that you can replicate from the comforts of your home, even with the most powerful internet connection. Then there’s the celebratory meals after a hard-earned victory, with you and your friends drunkenly stepping out of the cafés a few hours later, eyes squinting from the sudden intake of light.

“LAN gaming was a more social activity. You’d make plans with friends and make an outing out of it – we used to spend hours each time playing Counter Strike!” says Lara D’Souza, who hasn’t been back to a LAN café in a long time. “LAN cafés also had a much younger audience, it was very common to see school kids my age at these cafés so it definitely felt like home.”

Sadly, many of the old LAN haunts have shuttered, with only a handful of these places still persisting today. Most of what remains of these shops are now located in the Dhoby Ghaut area, with Parklane Mall becoming the last bastion of the cafés of old.

One reason behind their demise is the astronomical prices of rent in the city, and of course the other being that computers and consoles are generally way more affordable now. When you can game online from the comforts of your bed with your smartphone, who needs to make the trek to the desktop four feet away, much less to the LAN café?

But it’s the company that ultimately made LAN sessions so memorable – which is what many of the spiffy, modern LAN cafés of today are trying to tap into to stay viable. Today’s LAN cafés are much roomier and more well-ventilated than before. Some places boast luxurious sofas, ergonomic gaming chairs and top-of-the-line gaming peripherals. Panda Q Cyber Café, for instance, even comes with water-cooling PCs for players who demand better performance. “For some of these newer LAN cafés, they are trying to build a local community, which I respect, around things like gaming events, launches, esport tournaments. There’s a lot more shine and gleam to the way things are run today,” adds Jun Shen.

But for a certain generation, nothing will replace the dank, musty confines of an old-school LAN café. “These days, for me, going to a LAN café like at Parklane/PoMo or Khakabo, is akin to wanting to relive the good ol’ days with some friends and having a laugh when you have nothing better to do,” explains Jun Shen. “Some friends I used to play games seriously with either have given up on gaming entirely or don’t own good enough machines to play at home, so we go have a bash for an hour or two on something mundane like Left 4 Dead.”

This is what will be missed – the carefree times of our youth, the feeling that time was an infinite resource that could be spent lavishly on endless gaming sessions, and most significantly the shared feeling of camaraderie, from commiserating over losses to celebrating wins over an unhealthy, but utterly hearty meal. Of McDonald’s.

Have anything to add to this conversation? Let us know your thoughts at [email protected]

Does it deserve your HDL or DTF money?
Experiments