Is Desmond Des-tined to continue his father's legacy? 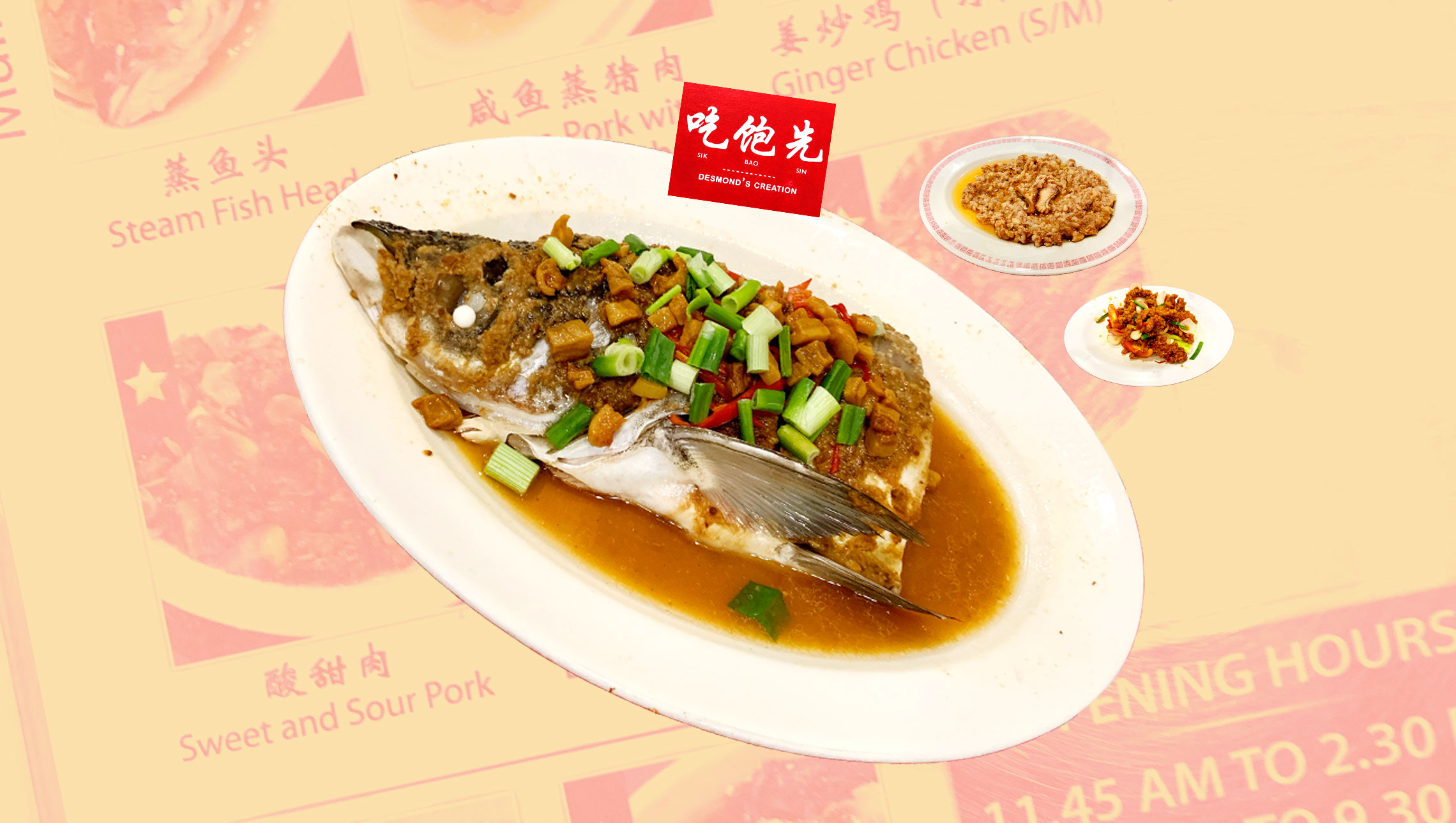 Yes, fish head vibes intact- but then, the wallet-emptying prices will make us think about coming back. 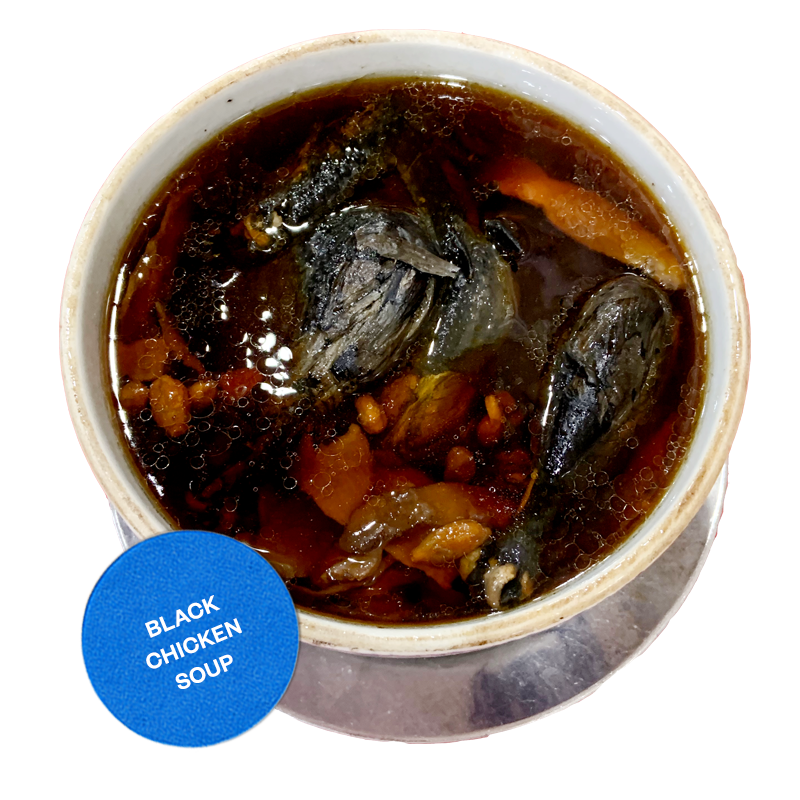 As one of us pulled up a stool, an enquiry was made,

“Have we eaten here before?”

“Yes …ish. We went to the restaurant run by the dad down the road, Sik Wai Sin- Desmond is his son, this is his restaurant, Sik Bao Sin.”

“Oh is this the ‘drawers full of fish heads and steam place’?” (In reference to the dad’s cool fish-steaming appliance.)

While being a Tze Char store that could reliably bang out the familiar, Sik Wai Sin was equally known for its steamed fish head; specifically it’s “Songhe”, which is Asian Big Head Carp, and with this realisation, some of us feeling feeling slightly conflicted about was to come: the taste of freshwater fish. 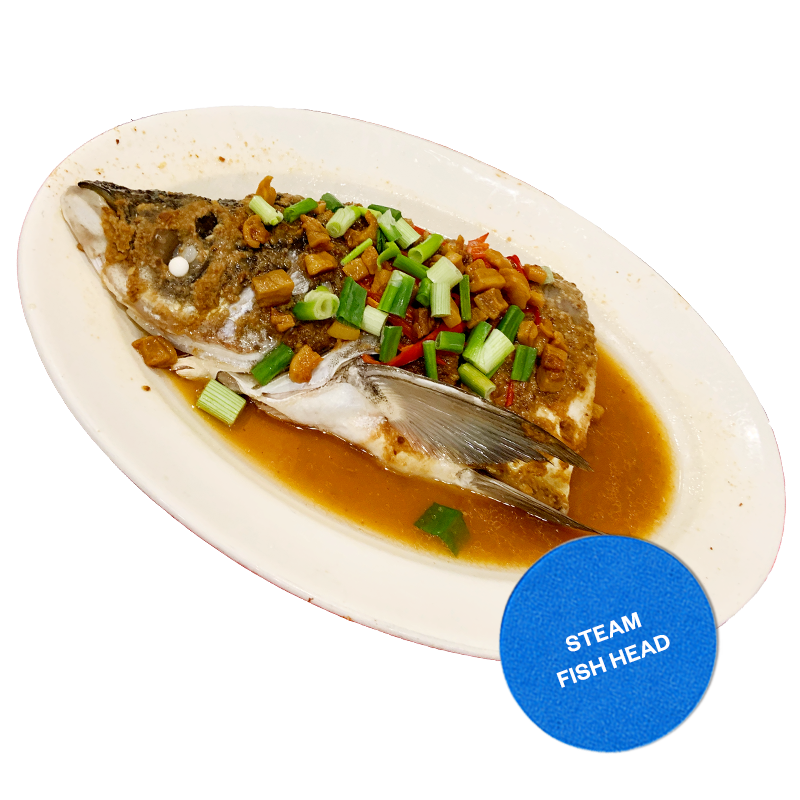 If you’ve never had “Songhe” before, this is one divisive tasting critter – some optimistically describe it as sweet, but we would describe it as somehow managing to be both muddy and metallic at the same time, and a little bit… gross. Ok, not all of us, you understand, just this writer.

All the same, we were here in the new restaurant run by the son, and with the weight of expectation from a newly bestowed Bib Gourmand award for 2019, the ordering commenced. We rattled off a bunch of dishes from a small menu of items (17) with, interestingly no prices attached.

We got the Black Chicken Soup, and also portions of the Steamed Fish Head, the Tofu Prawns, Steamed Pork with Salted Fish, The Sweet and Sour pork and Kang Kong Blachan. That seemed enough for the table, and we hoped, would be enough to trigger clearer memories of our visit to the old outlet.

The good? The pork was a homely and honest dish of meat, salt and oil; and anecdotally, the other big reason why people come here to eat – this dish seems to be as iconic as the fish head. The kangkong was also a great, with fermented bean and hae bee (dried prawn) introducing a delicious funk. The not-so-good? The sweet and sour pork was mostly batter and hardly any pork – it arrived looking like a plate of coral branches – which was pretty, but one of us had the strange feeling of mimicking a feeding parrot fish (they eat coral lah). Also, the chicken soup was a bit of a let down, with the dramatic volume of herbs in the pot writing cheques the flavour of the soup itself could not cash. It’s okay to give this a miss.

And so the fish – a dish that some have described as “legendary”?

Memories of the Sin Wai Sin version came back as Desmond’s version arrived – half a head of steamed carp, basted in taucheo (bean paste) and covered in nuggets of crispy pork lard – which really, would be the not-entirely-unreasonable, ONLY reason to order this dish; the lard pieces do plenty in adding texture and cardiologist-unapproved oiliness to each mouthful, taming what would otherwise be a somewhat harsh fish dish, one so fishy that even the power of taucheo can’t quite take the edge off.

A tip? We bang on a bit too much about food temperatures in our reviews and we get annoyed when food gets served cold. But in the case of this dish, we recommend letting it all sit to cool off and gather its thoughts for a bit; it starts to make some sense then.

So is this place worthy of its Michelin Bib Gourmand recommendation?

Honestly, while the food here is good, a meal here is not significantly more enjoyable than one you could have a your favourite Tze Char place; they all have their own personalities don’t they? So is the recognition even relevant? Having said that the food served here is refreshingly free of MSG, which can reach take-the-piss levels at some other places. (We are looking at you, Kok Sen.) 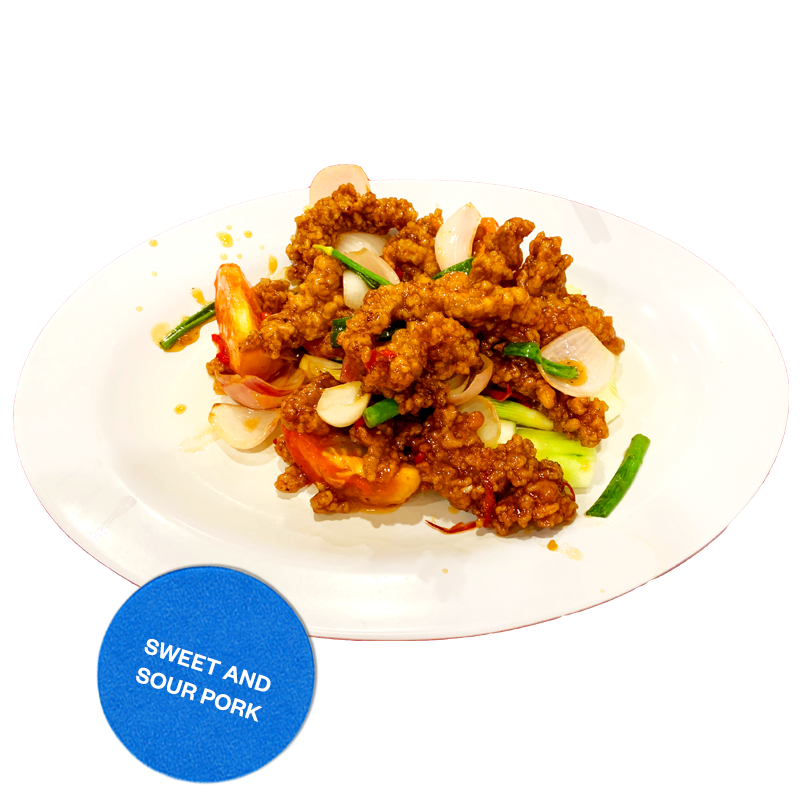 Also, if we take a step back and remind ourselves that the Michelin Guide is really not for us locals, it’s worth noting that Sik Bao Sin, is perhaps one of the more “homecooked”-tasting Tze Char places you can eat at. Which is a facet of local dining that visitors rarely get to experience, and reminds us why the original restaurant was big with the Indonesians (and so too this outlet, from what we could tell).

BUT, unfortunately, it all comes with an exploitative price tag that made us go, “Really?” Dinner for three came up to a a surprising $132. And $29 for a plate of tofu prawn that comes with a measly three prawns was really them having a laugh, tasty or not.

That being said, we did clear out all the plates (apart from the sweet and sour pork) without prompting each other. And this was done with price unseen, so it was clear that we did not eat everything with the intent of extracting max value of of the meal – which we guess is validation of some sort.

Not-so-great for:
Value on some dishes.

Same-same but different:
Also can go to your favourite Tze Char, lah.

Check out our other JUNK Food Reviews.