“Rethink(ing) Retail’ or your dad having a midlife crisis?

Why – you may be wondering, reader – are we reviewing a supermarket?

Well, the opening of FairPrice Xtra at VivoCity is allegedly a seismic event – one of our established supermarket players, who lost their “value” crown to Sheng Siong years ago, is attempting to find their place in the scheme of things by attempting to be Relevant™ and – to their words, not ours – “Rethink Retail”. A physical expression of the future of the physical supermarket to complement their growing on-line retail business.

So does the message of “Rethink Retail” convince IRL?

When Cold Storage’s value-driven (but actually not) supermarket brand Giant let go of the 90,000 sq ft space at VivoCity last year, FairPrice pounced on the site, and given the huge amount of space on offer, allowed themselves the room to experiment – hence, a less rigid layout, breakout spaces, lots of visual merchandising displays, as well as appealing warm lighting and larger-than-life hipster typography.

Visiting a month after it’s opened, it’s clear that this supermarket is a huge draw, bringing back life to the basement of VivoCity.

The space is as large as one recalls it to be, but with just the right amount of intimacy in the spacing of things, and miles better than the patronising faux warehouse aesthetic of Giant.

FairPrice crow about a roster of innovative services and in-house features to lure customers down. Some things feel on-trend and useful (bag-your-own products, vegetable-cutting for the time poor, luggage repair,Pick and cook in-store kitchen), while others feel a touch more gimmicky – roast your own coffee? In-house hydroponic farming? Make you own nut butter? Hmmm.

The not-so-great? Despite the “Fresh N Funky” window dressing, there is a distinct lack of any atmosphere – you know, the soft things: no background music (to our ears at least), no staff on hand to draw your attention to visual merchandising. In summary, nothing that runs the last mile that would take this from just a hipster supermarket, to something more experientially polished that could convincingly rival online shopping.

And despite 35,000 products there really is nothing that intriguing to look at.

The nett effect of these impressions pulls you back to what this is – essentially, another very large FairPrice in an accessible location. Despite their best efforts, this outlet is not going to change the way we look at FairPrice, it’s just a touch too flimsy in execution to really make us think they have become retail trailblazers. But there’s really nothing wrong with that too. Imagine coming to a FairPrice and not getting your sundry items at reasonable prices, but instead find a gratuitous display dedicated to Alba Truffles. The pitchforks will be out and sharpened.

One also can’t look at this FairPrice Xtra and not think it a bit too similar in vibe (copy lah) to Honestbee’s Habitat, a venture that this effort will be inevitably compared with. For the uninitiated, Habitat is an ambitious rethink of supermarket retail which beat FairPrice to the punch by a few months, opening late last year. In comparison, it has a deeper commitment to surprise and delight, with more F&B concepts and less commonplace products, and an ambitious if annoying attempt at integrating tech into the experience; the caveat being Honestbee are now going through some highly visible problems, so the fate of Habitat hangs in the balance. 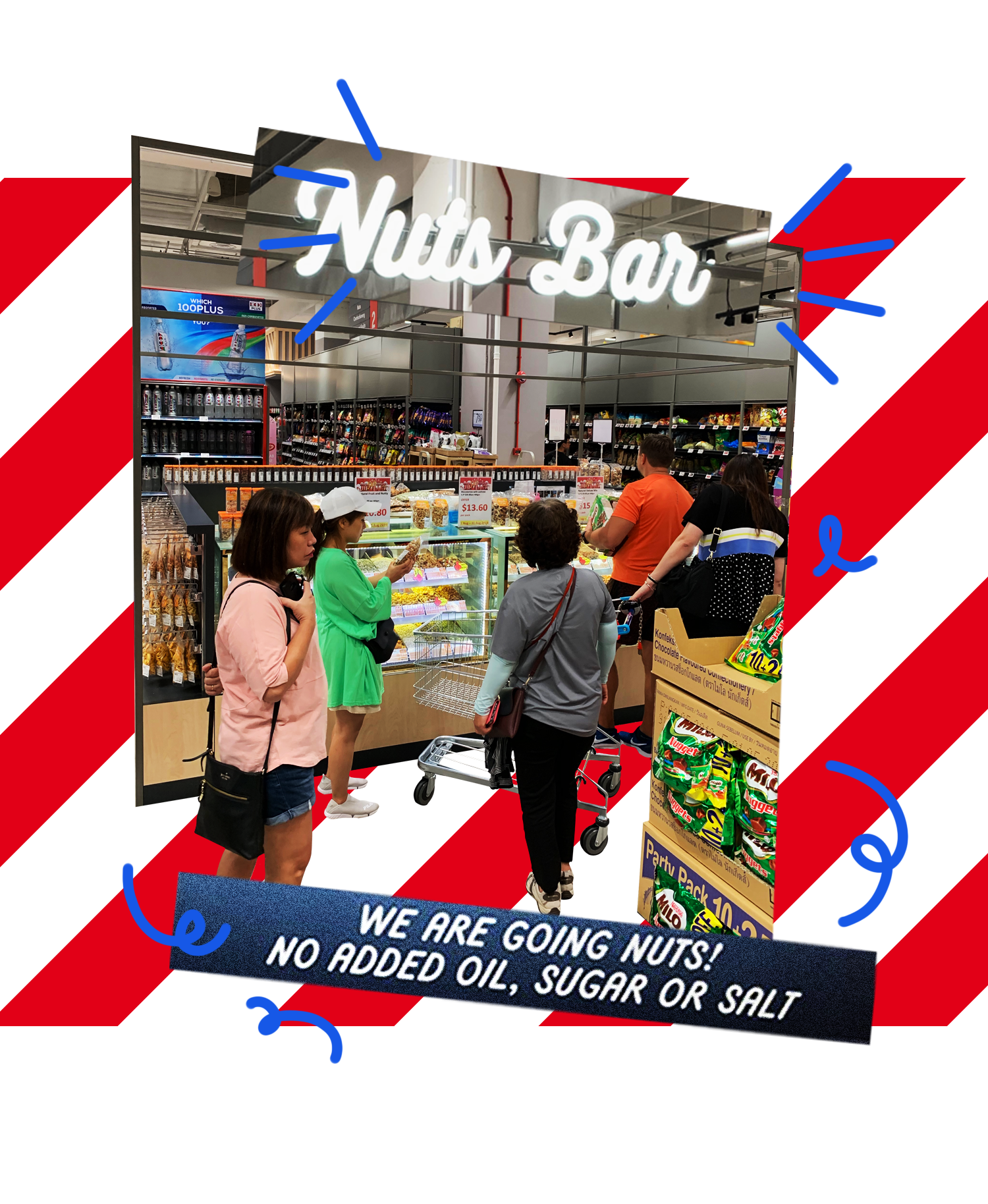 As midlife crises go, FairPrice’s attempt at experiential is largely a palatable venture – funky-ish, yet safe and relevant to their existing customer base. This is not your dad suddenly becoming a Hypebeast, wearing Yeezys and an Anti Social Social club tee while showing you his vape pen. (Jia lat, try hard.) It’s more your mum turning vegan, extolling the virtues of coconut oil and rocking a jute tote bag. (More woke, on-brand, slightly cool.)

Which, given the harsh reality of Singaporean shoppers, who are a no-nonsense bunch that love a good deal, makes the most sense. And, judging by the cleared-out shelves on a Sunday night, seems like the right play.