For junk food addicts, whether or not the McSpicy the best burger on the McDonald’s menu is a matter of debate. We wondered – can this sibeh extra concoction of fire, crunch, and McDonald’s-wizardry be improved… FURTHER? Our resident junk food hacker sees you your McSpicy Deluxe, Ronald, and ups the ante with no less than four DIY McSpicy hacks! Which crazy McSpicy will prevail?

As if it wasn’t fiery enough, McDonald’s recently decided to upgrade the McSpicy to the McSpicy Deluxe. Decked out with some white cheddar cheese, a slice of tomato, a tomato-jalapeno relish and a cornmeal-dusted bun, the McSpicy Deluxe is basically the bigger, badder older brother that’s ready to kick your ass if you’re up for it.

But how much better is the McSpicy Deluxe compared to the OG fiery delight? As an avid McDonald’s fan, I simply had to put it to the test. 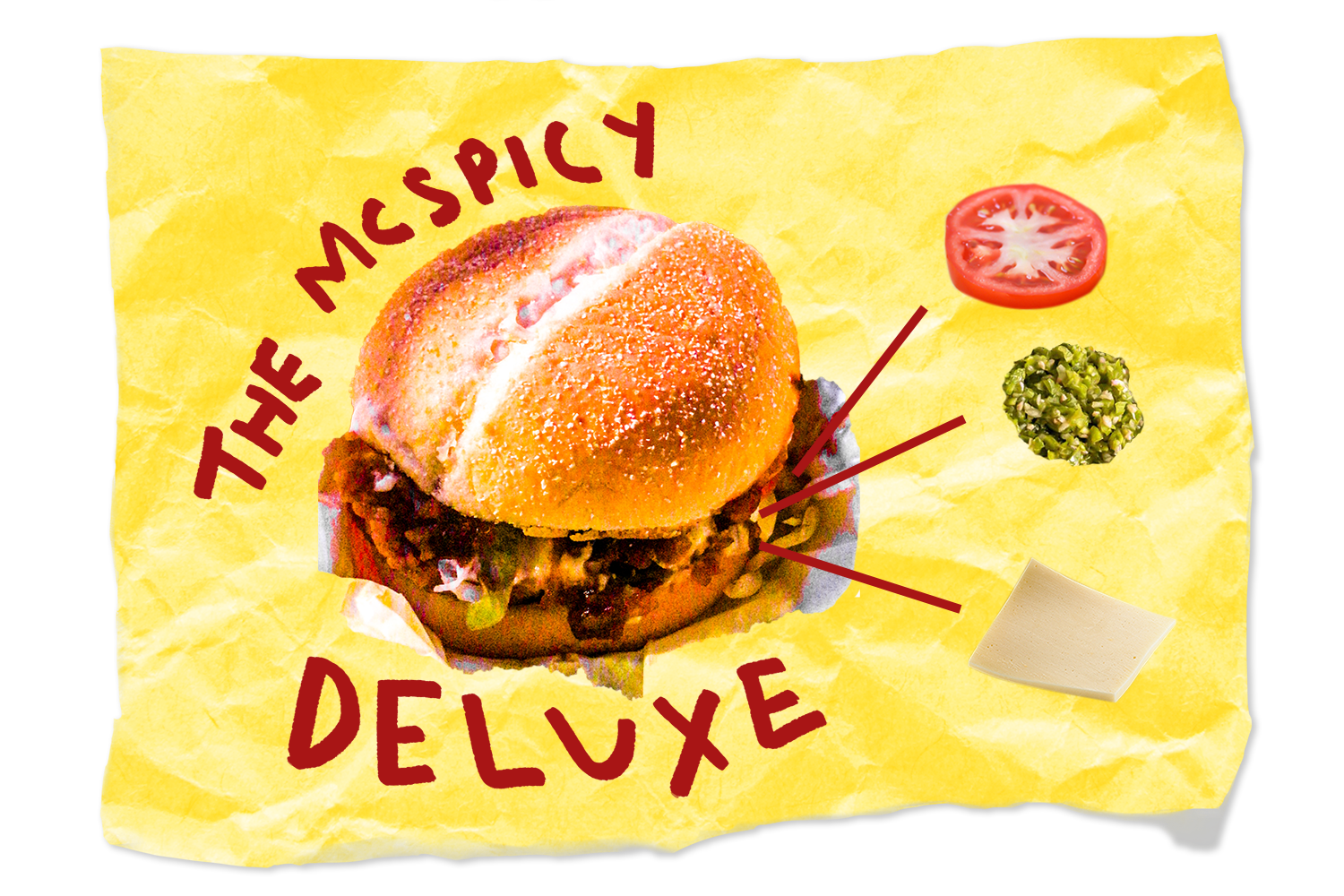 Right from the get go, the McSpicy Deluxe does look a lot more premium. It almost feels heavier in your hands, and you’re met with equal parts fear and excitement.

To be honest, I liked the sound of everything about the McSpicy Deluxe except the tomato slice. But to my surprise, it actually works. It adds an extra crunch to the burger, a slight sweetness to counter the added spice from the jalapeno relish, and it tricks your mind into thinking that the heavy-loaded burger you’re shoving down your throat is just a little bit healthier.

Before I knew it, I had eaten the entire thing. Did the additions make the McSpicy any better? Hell yeah. I’d give it an improvement score of 4 out of 5.

But then it got me thinking… are there other, better ways to spice up a McSpicy?

Turns out, there are. Because YES, you can go up to the cashier and ask for customisations to your burger at McDonald’s. A different bun? No lettuce? More cheese? The possibilities are endless.

Which brought me to the question of – where should I start? Armed with some crowdsourced ideas and suggestions – thanks, Instagram – I was ready to get (my tummy) lit. 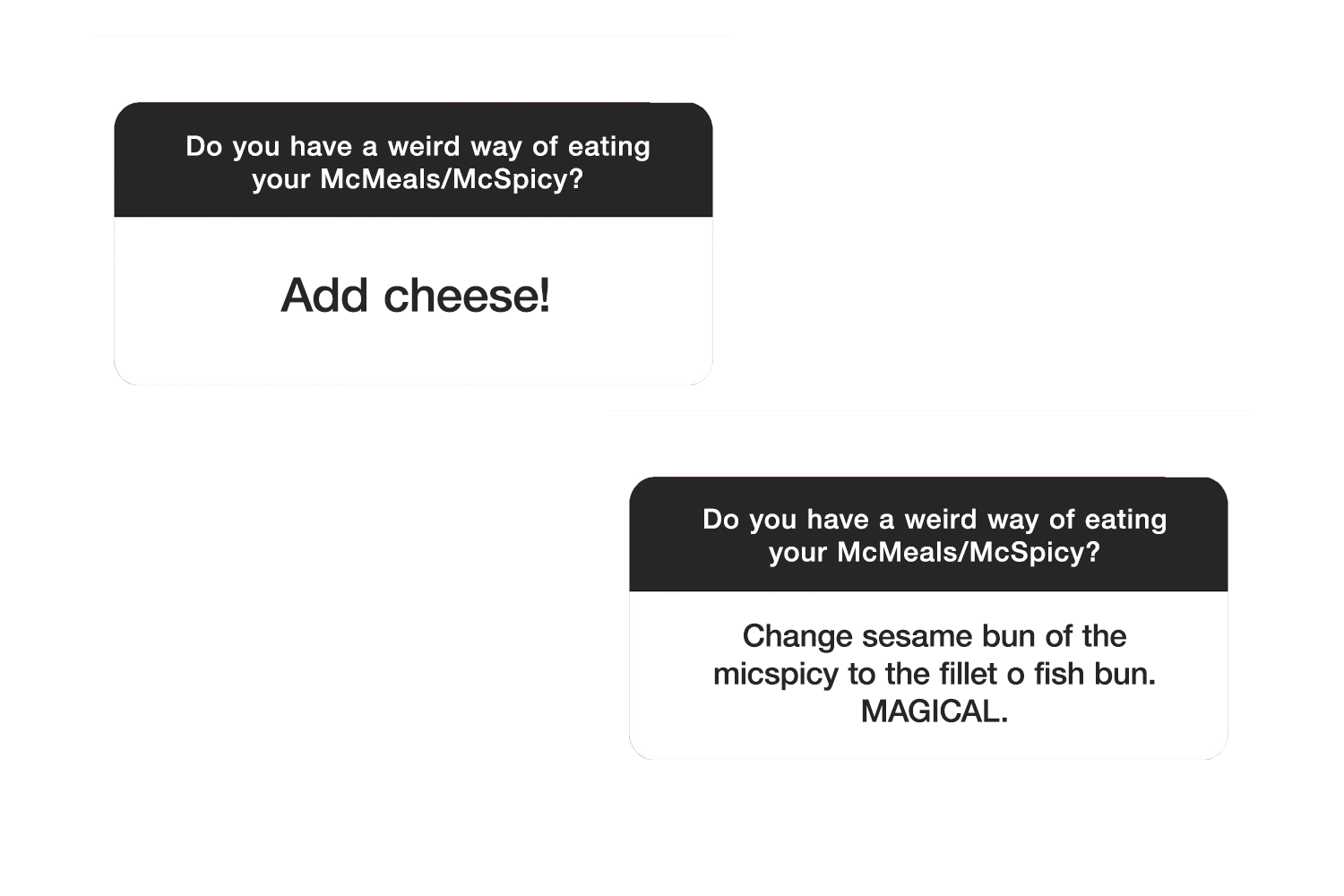 I started slow, with the most basic and common improvement to the McSpicy: add a slice (or two) of cheese to it. Another less common McSpicy hack is to swap out the sesame bun for the steamed buns you get with the Filet-O-Fish.

The McSpicy Deluxe boasts those modifications too – a different bun, and a slice of cheese. But could the steamed bun fare better than the cornmeal-dusted bun? 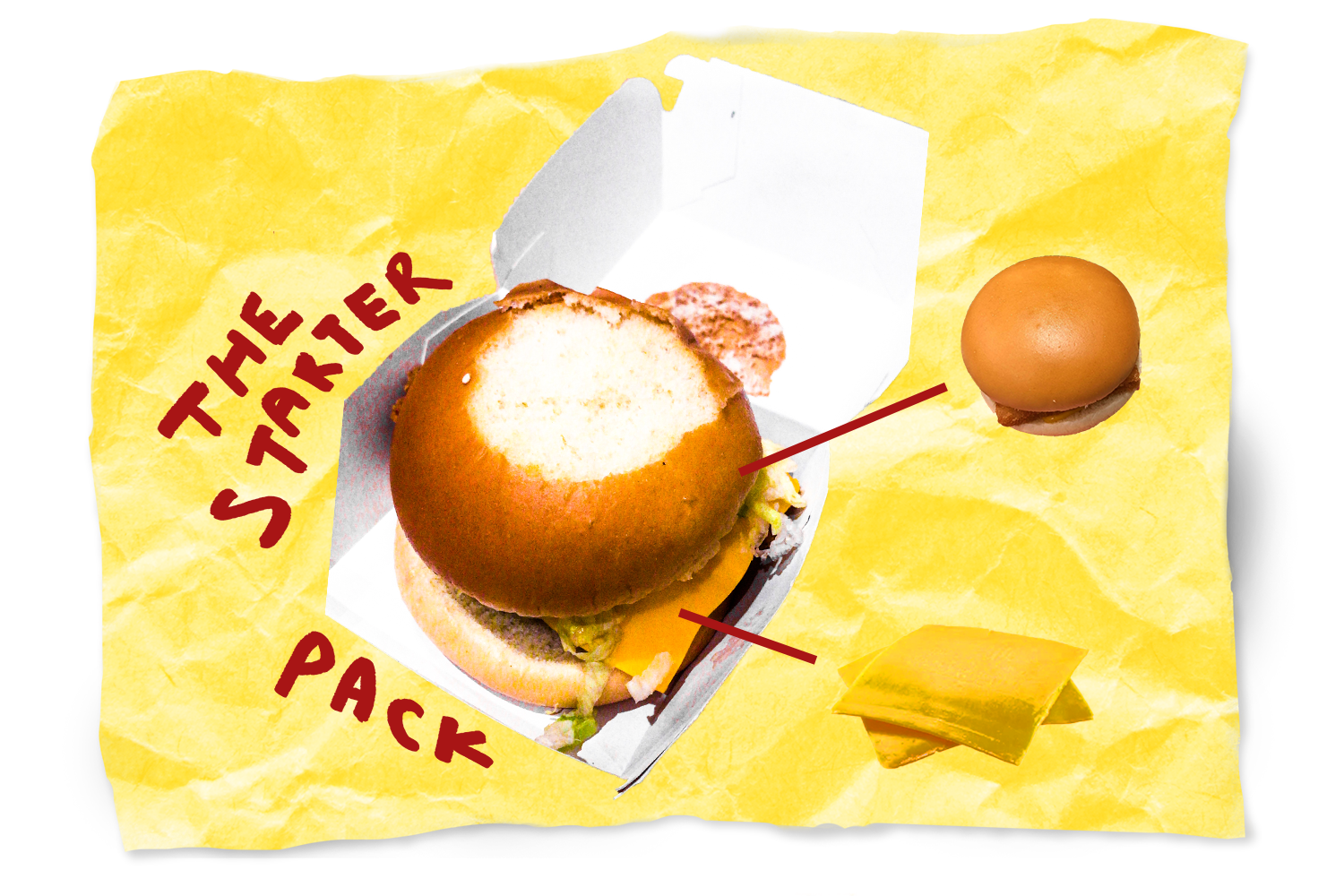 I found that the answer is a big fat no. The steamed bun does taste a little better and feels a little softer in your hands, but it’s way too fragile. Call it bad luck, but my steamed bun McSpicy disintegrated even before I could take a bite.

Flavour-wise, it pretty much still tastes the same as the usual McSpicy. The cheese helps, but not much. I’d give the Filet O Cheese McSpicy an improvement score of 1.5 out of 5. Not impressed.

The next hack that was suggested to me was a little less basic, and ventured closer to the Deluxe itself. The jalapeno relish was the star of the Deluxe. So maybe what the original McSpicy needed was a sauce that’s got a bit of a kick to it?

Good thing I had a suggestion that fit the bill. 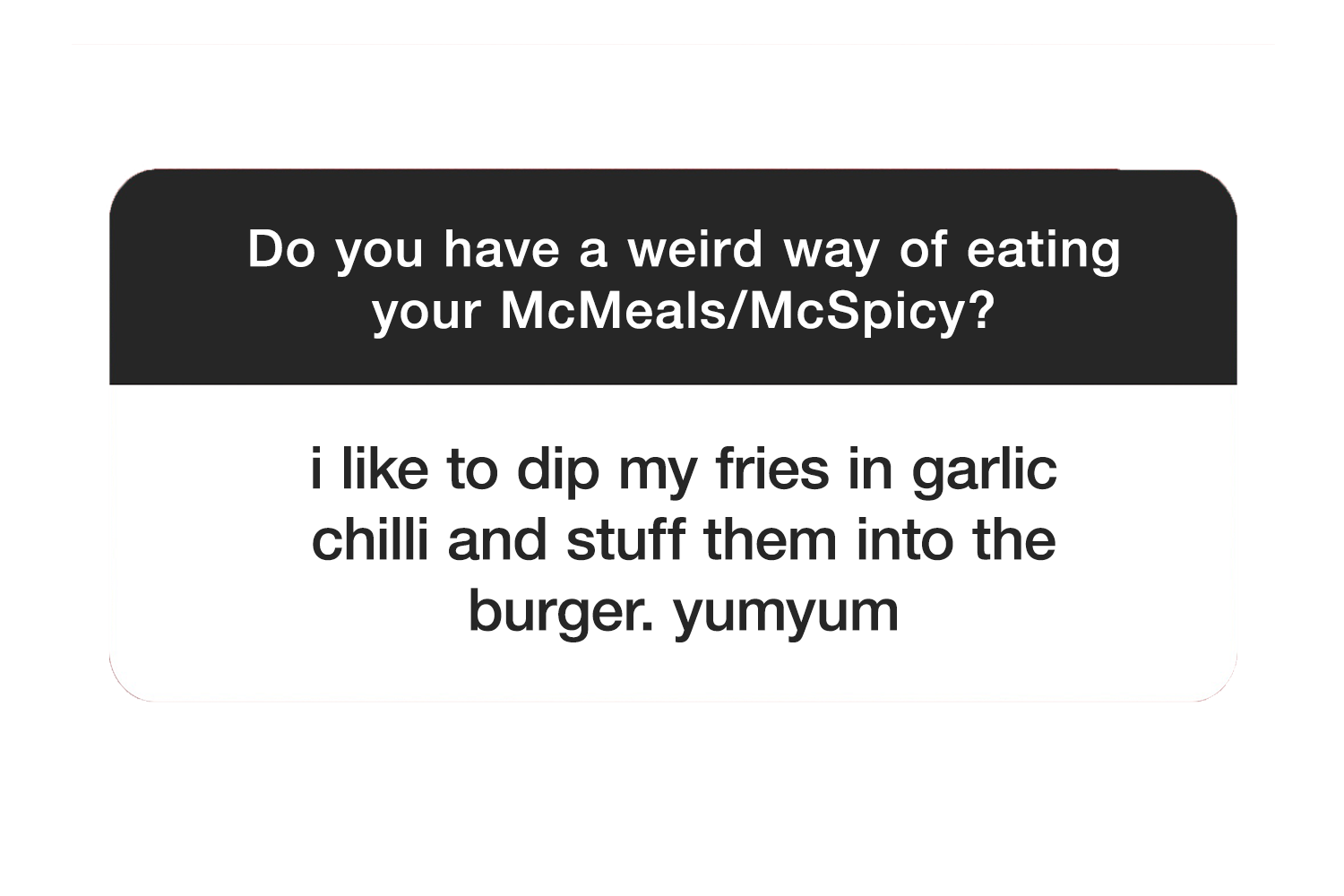 And thus, the garlic godzilla McSpicy was born. It’s not fancy, but it tries to do what the jalapeno relish does for the Deluxe. Add some tang, a little bit of sourness to temper the richness of the patty. Sadly, it didn’t live up to expectations. The fries and garlic chilli sauce (as much as I love them) didn’t do much for the McSpicy – except to make it messier to eat. All in all, I’d only give the Garlic Chilli Fries “relish” an improvement core of 0.5 out of 5, and I’m being generous.

Since the garlic sauce didn’t do it… maybe an actual pickle might? Turns out, a McFriend of mine of had already been simulating the McSpicy Deluxe’s flavour innovation with an original hack of his own… 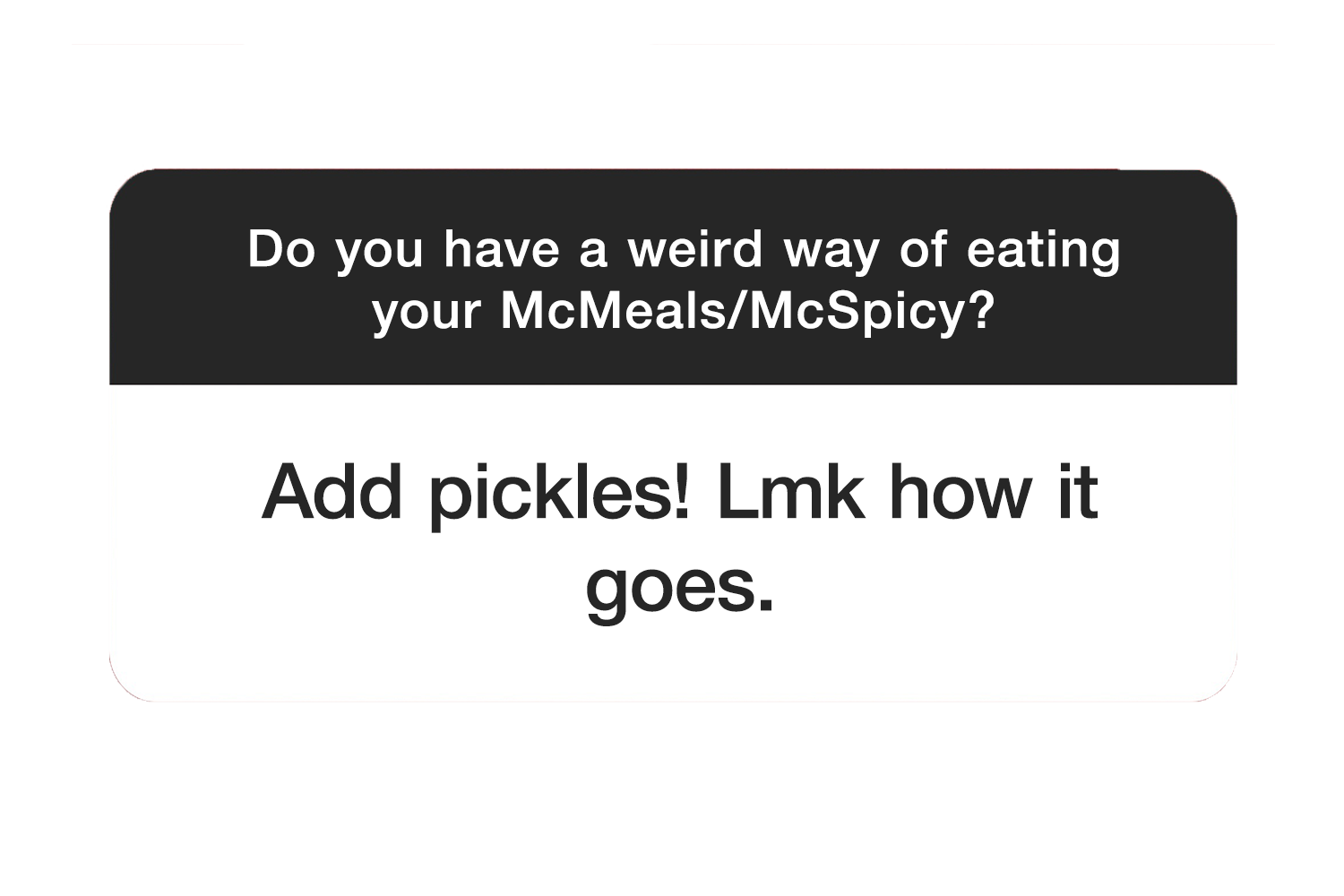 I wasn’t sure what to expect, but the first bite was… surprisingly good. Like the jalapeno relish in the McSpicy Deluxe, the pickles added a nice bite to the McSpicy. They also threw a bit of acidity and sourness into the mix that actually worked well with the spiciness of the patty. 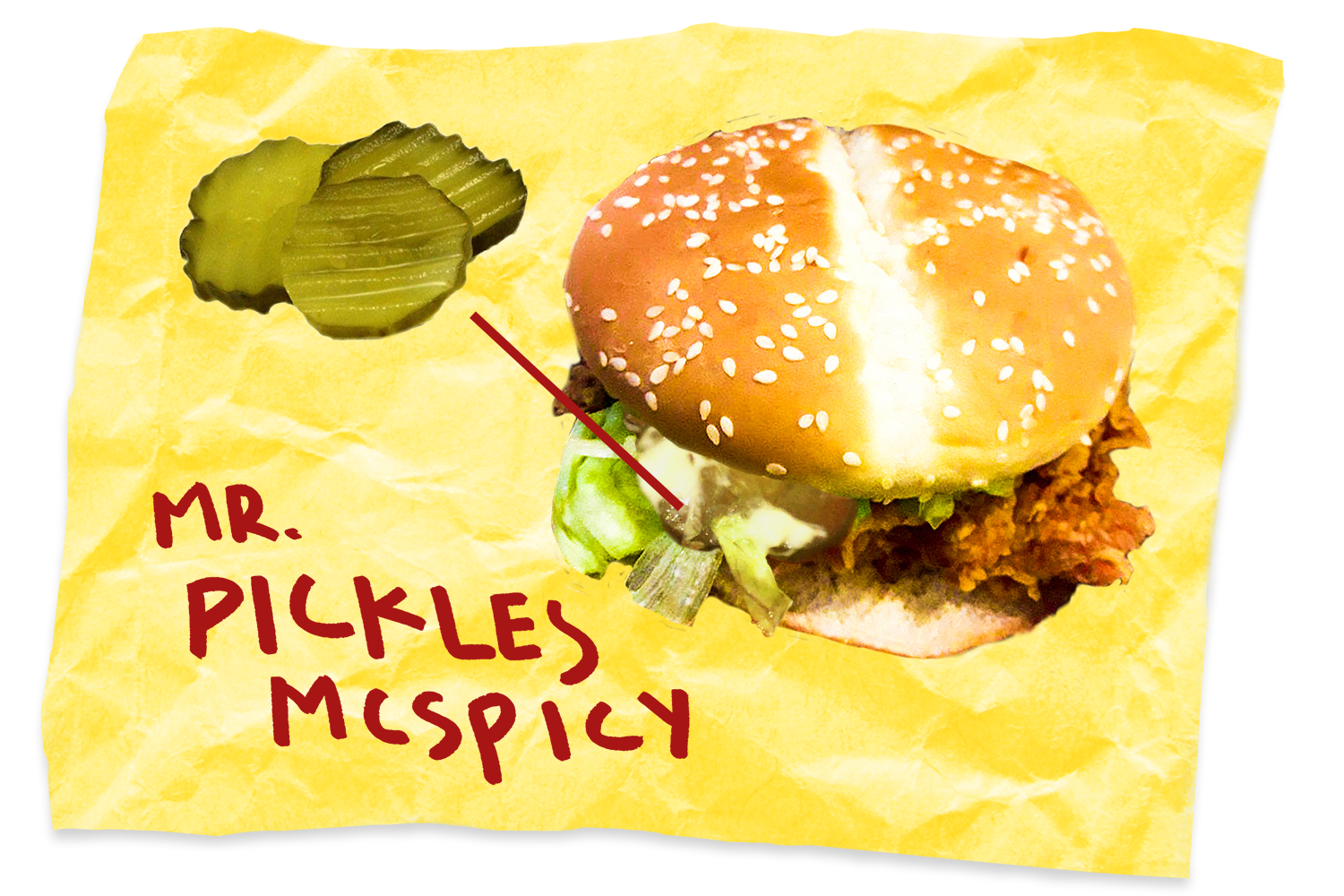 I enjoyed the Pickle McSpicy, and had to give it an improvement score of 3 out of 5. Who knew something so small like a pickle could do so much?

The past three experiments were my attempts to replicate the success of the McSpicy Deluxe, and they weren’t quite up to par. And as the saying goes, “If you can’t beat them… well fuck it.” I decided to find a different way to improve the McSpicy – one that was completely out of the box.

I had an idea. I bounced it around with some friends and was basically met with stares of disbelief and comments like “That sounds insane!” or “Are you okay?” – but these people aren’t crazy (about fast food) like me.

My idea: a McSpicy with… maple syrup.

It’s nothing new. Most of us have probably would have enjoyed the heaven-sent combination of chicken and waffles before. But what most of us haven’t tried is a spicy, oily chicken with the sweetness of maple syrup. It sounds completely bonkers. 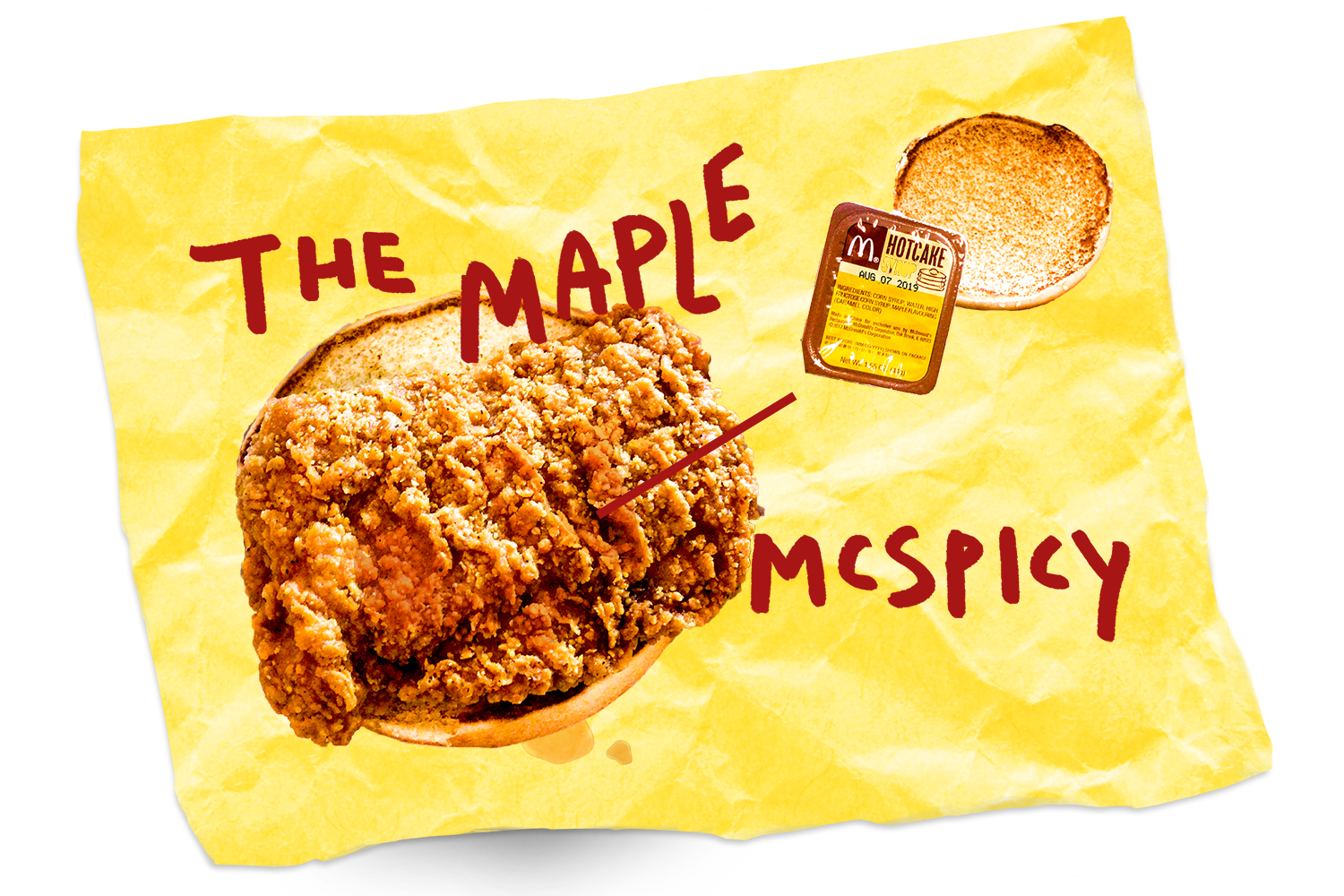 But it is also incredibly delicious.

I’ll admit, with the number of people discouraging me from doing this, I started to have some doubt. But all that doubt went out the window once I took my first bite of the Maple McSpicy. My eyes lit up, my nostrils flared, and I felt like the greatest culinary genius of 2019.

My crazy idea actually works! Granted, you’ll have to soak the entire burger in a heap of maple syrup for the sweetness to overcome the spiciness of the chicken patty. But just go ham on the sauce, and you’ll bite into something truly amazing. It can get a little messy, but goddamn is it worth it.

I’m not being biased (really, I’m not) but I’d give the Maple McSpicy an improvement score of 4 out of 5.

As I licked the last bits of maple syrup off my fingers, I was a happy little camper. Full, satisfied and fully pleased that I had proven everyone wrong, I was left wondering – what other crazy fast food mash-ups/experiments can I do?

Hungry for more? Have some crazy fast-food suggestions for us? Email us your thoughts at [email protected]

The gahmen doesn't have a clear plan. So here's ours.
D'Junked

The Four Degrees of... David Gan?