The Future 50 Foods, According to Knorr

Last week we dived into the issue of food security with a look at Sprout, Singapore’s Farm-to-People Festival. This week, we continue to ponder the theme with a look at Knorr’s report on Future 50 Foods that will ostensibly save the world!

Earlier this year, Knorr and the World Wildlife Foundation partnered to launch the Future 50 Foods Report – a catalogue of 50 ingredients that aren’t just focused on making us healthier, but the planet, too.

And who doesn’t want to know what the future will look like? Especially when it comes to food. Great cinematic imaginations have already taken a stab at envisioning all the ingestible things of tomorrow, from the edible bug farms of Blade Runner 2049, to Rey’s self-baking bread in Star Wars: The Force Awakens, to Charlton Heston’s unforgettably dehumanising realisation that “Soylent Green is people!!!!” "Next thing they'll be breeding us like cattle. For food!"

So we took a look into Knorr’s crystal ball to see what our future meal times would look like. After all, they make Marco Pierre White’s favourite stock cubes, so they should know what they’re talking about, right?

Unsurprisingly, the future of food as per Knorr is a lot less outlandish than a scene from a science fiction movie. But actually, it’s not outlandish at all!! In fact, the foods of the future are apparently… straight out of… our past?

If you want to be underwhelmed, here are Knorr’s FUTURE 50 FOODS! In all their non-futuristic glory – 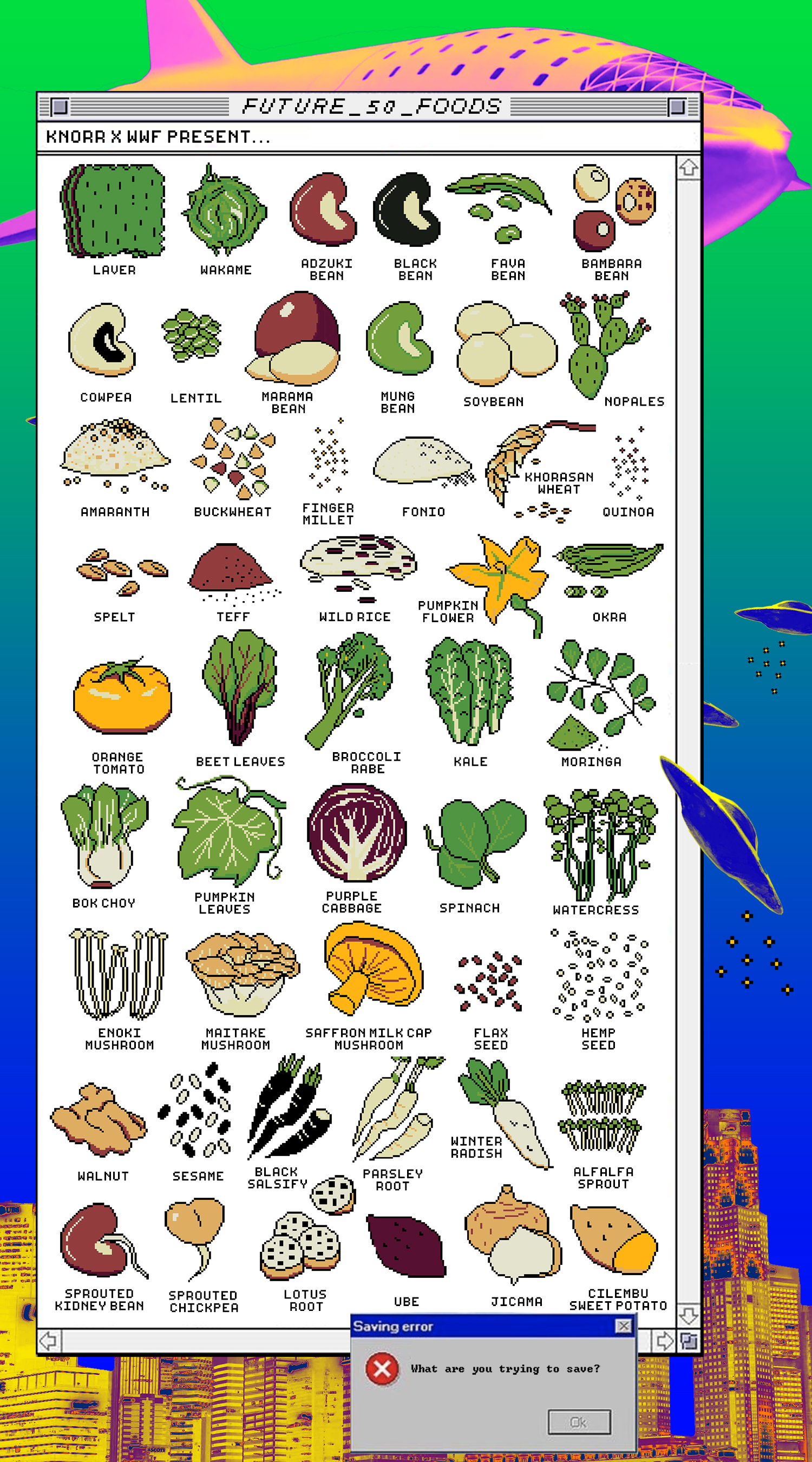 We know, right? It reads like the standard inventory list of any organic/health food store. Snore. And note that nothing on this list actually looks like new or inventive foods – of the sort that Rene Redzepi is literally scrummaging from the forest floors of Denmark, for example. Also no cricket pasta or coffee flour or lab-grown prawn meat here.

Nope, Knorr’s Future 50 Foods is instead a list of mostly traditional ingredients – like nopales (Mexico), wakame (Japan), and pumpkin flowers (India – Google “Pumpkin Flowers Indian Recipe” for something that looks truly delicious). Which in turn gives us a list of 50 foods that have historically been a part of regional or ethnic cuisines – but might possibly have slipped out of fashion thanks to the supermarketisation of our global diets.

So forget Soylent Green, our future dinner plates are a reassuring blast from the past!

The thought of that is actually quite romantic – maybe we will be sitting comfortably in our steel-and-glass towers eating alfalfa sprouts and enoki mushrooms grown from our own sustainable rooftop farms? But it also leads to a kind of icky feeling… because there is something actually quite distasteful and disingenuous about a multinational provider of processed food advocating a return to the days of Khorasan wheat, fonio, and spelt. 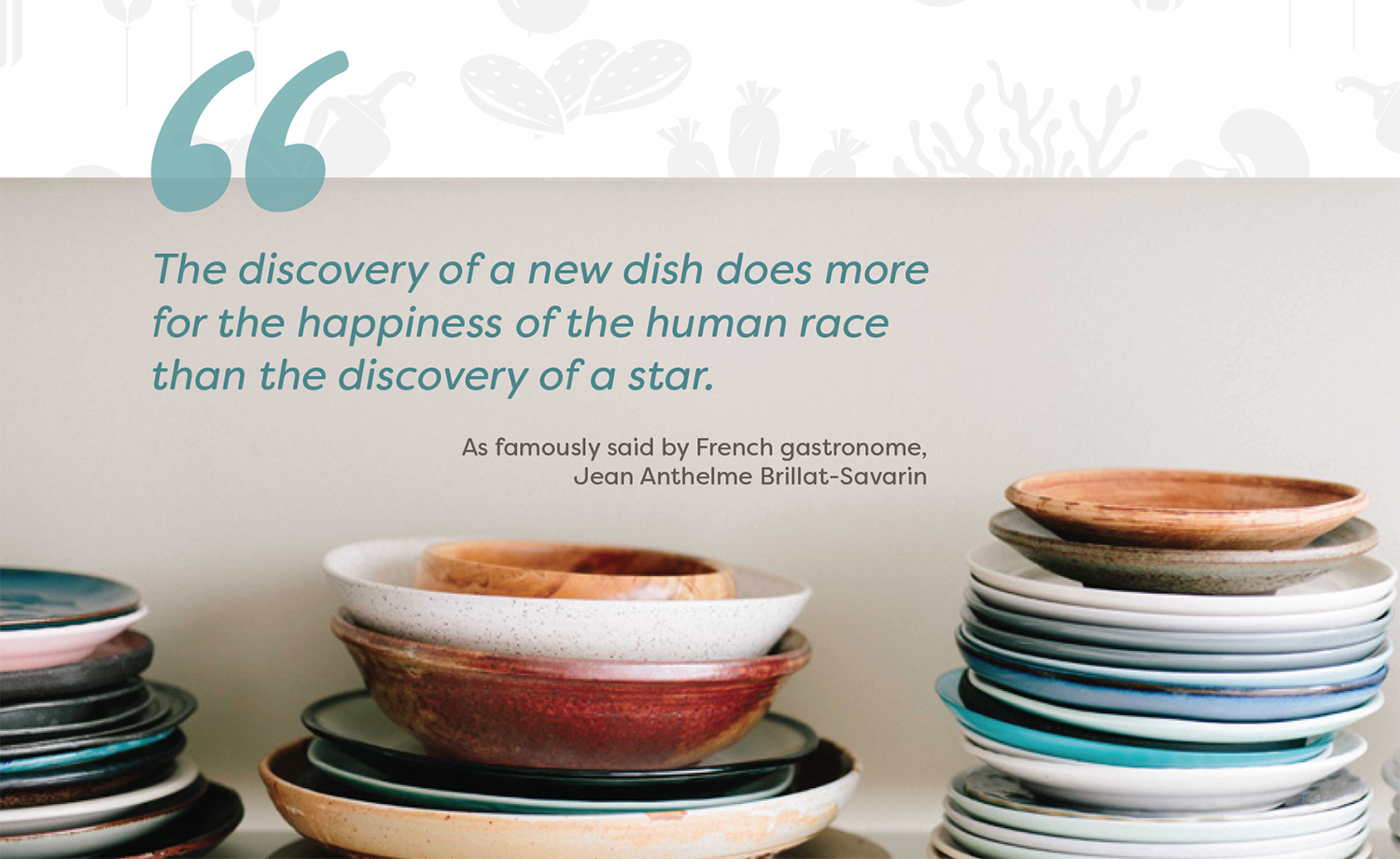 And when the authors of this report wrote about the need to “stimulate a shift towards plant-based foods” because “rearing animals for food is associated with significant greenhouse gas emissions”, we guess they must have also forgotten that their sponsor makes money largely from selling chicken and beef stock cubes. Either that or they must have a highly evolved sense of irony.

Don’t get us wrong, because we really like seaweed and soy beans and daikon and Indonesian sweet potatoes too. There’s nothing wrong with eating more of these foods. (Except maybe soy beans, because they’re burning down the Amazon rainforest to grow it, boo.)

But, you know, there’s something about consumer companies making these reports for the sake of cooking up some corporate goodwill and acting like “EVERYTHING WOULD BE FIXED IF WE, THE CONSUMERS, JUST MADE BETTER CHOICES” that makes us feel very cynical.

If you care so goddamn much, how about giving us better options? How about an meat-free soy-based, heme-filled, ImpossibleTM bouillon cube that makes everything from coconut water to alfalfa sprouts taste savoury, beefy, and bloody delicious?

No? Okay, lor. Then keep making your reports. But don’t expect us to like it.

Have something to comment or add to this conversation? Email us your thoughts at [email protected]