The Four Degrees of… David Gan? 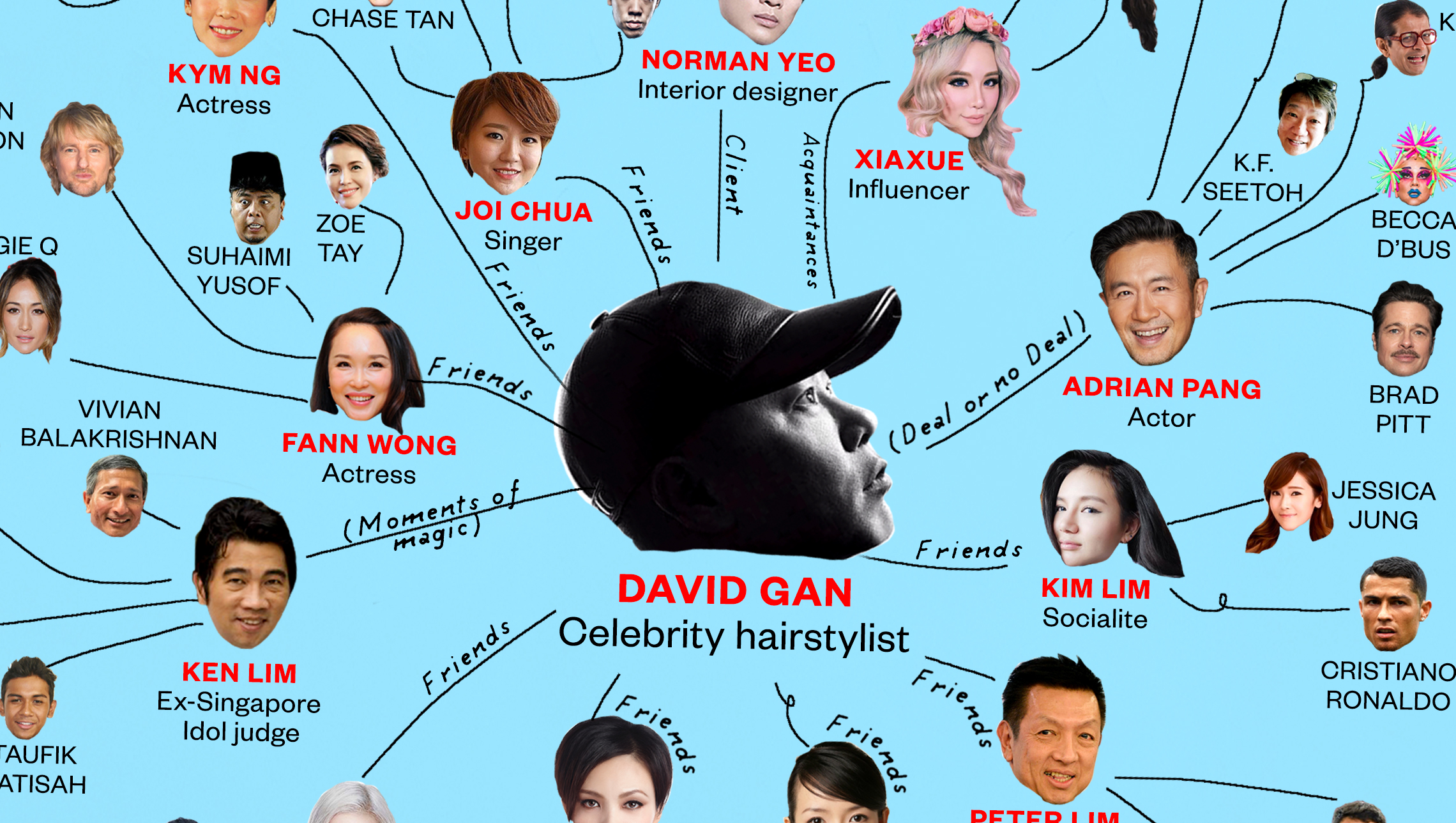 You might have heard of the six degrees of separation (or the genius spin-off, the Six Degrees of Kevin Bacon). If you haven’t, it’s a theory that basically posits that any two people in the world can be connected within 6 intermediaries.

We’ve taken the theory and applied it to the one person who knows all our dirty secrets and gossip – our hairdresser. But the hairdresser we have in mind isn’t any old hairdresser, he’s arguably Singapore’s most famous crimper – David Gan. We’d reckon that David Gan is the lynchpin to Singapore who’s-who (and beyond), and, since Singapore is so small, we think we can do better than six degrees – we’ll do it in four. Despite both of them being stalwart ambassadors of Singapore, Makansutra head honcho KF Seetoh and Ambassador-at-Large Tommy Koh are two very different individuals, in very different fields. Luckily for them, celebrity hairstylist David Gan could be the key to bringing them together. KF Seetoh worked with Adrian Pang on a comedy called Republic of Food, and Adrian hosted David Gan on a special celebrity episode of Deal or No Deal. Our dear David is close friends with singer-songwriter-national-treasure Kit Chan, who launched the premiere issue of the National Museum’s magazine beMUSE in 2007 with Tommy Koh. Who knew you could go from foodie to diplomat so quickly?

Is Malaysia’s richest man Robert Kuok a fan of Singapore Idol Taufik Batisah? We don’t know. But we know that David Gan could set them up. Taufik has worked with Hype Records boss Ken Lim in Singapore Idol and The Final 1. Ken and David Gan go even further back, they previously collaborated on Singapore’s official millennium song Moments of Magic – Ken was producer, David was hairstylist. David’s also good friends with Peter Lim; he was a guest at his grandson Kyden’s birthday party. It’s a pity Robert Kuok wasn’t at the party, but we’re sure Peter has a direct line to Robert. After all, Peter made a lot of money when he invested into Robert’s Wilmar International.

President Halimah Yacob isn’t exactly a Crazy Rich Asian (she makes less than our Prime Minister), but she’s only 4 steps away from being friends with Crazy Rich Asians star Henry Golding. As President, Halimah obviously appears on the President’s Star Charity. Who hosted the President’s Star Charity? Actress Kym Ng. Kym and David Gan have a long history. Back in 2010, an article in The New Paper revealed that Kym has been a loyal customer of David for over a decade. In turn, David is friends with Fiona Xie, who everyone remembers seeing in Crazy Rich Asians as Kitty Pong. She didn’t link up with Henry Golding’s character in the movie, but we’re sure they’re great pals anyway.

Through master matchmaker David, we also see a connection between Minister for Law and Home Affairs K Shanmugam and Photoshop pro Daryl Aiden Yow. Can Singapore’s biggest fake news fighter be bosom buddies with Singapore’s biggest fraud-tographer? We’ll probably never know, but if they wanted to, we can see how they’d be friends. K Shanmugam once engaged the services of interior designer Norman Yeo, who also happened to be the same interior designer who designed David’s home. On the other hand, David Gan and Xiaxue are friends. The two unapologetic bastions of “telling it like it is” share a respect for each other that’s reminiscent of what Fann and Zoe have. As Singapore’s original influencer, Xiaxue had an inside line to the Daryl Aiden saga fiasco even before anyone else was aware.

And there you have it – a working theory that David Gan is the centre of the Singaporean universe!!!

Did we miss anyone out? To contribute to Four Degrees of David Gan, email your submissions to [email protected]

The gahmen doesn't have a clear plan. So here's ours.