They say a picture is worth a thousand words… Then what about a signature? As part of our continuing investigation into power in Asia, we recruited Selina Seah, Intuitive Energy Alchemist and Founder of The AuraChakra Company, to tell us more about the signatures of Asia’s most powerful, and what they reveal about the mindsets of those in power. Whose mark is the most magnificent? And whose chicken-scratch scrawl falls short?

JUNK: Typically, what are the characteristics of a very powerful signature?

Selina: While there are many things to look out for in a signature, the size, legibility, direction, and slant of a signature are a few things that will give hints on whether the signature carries a ‘powerful’ energy. 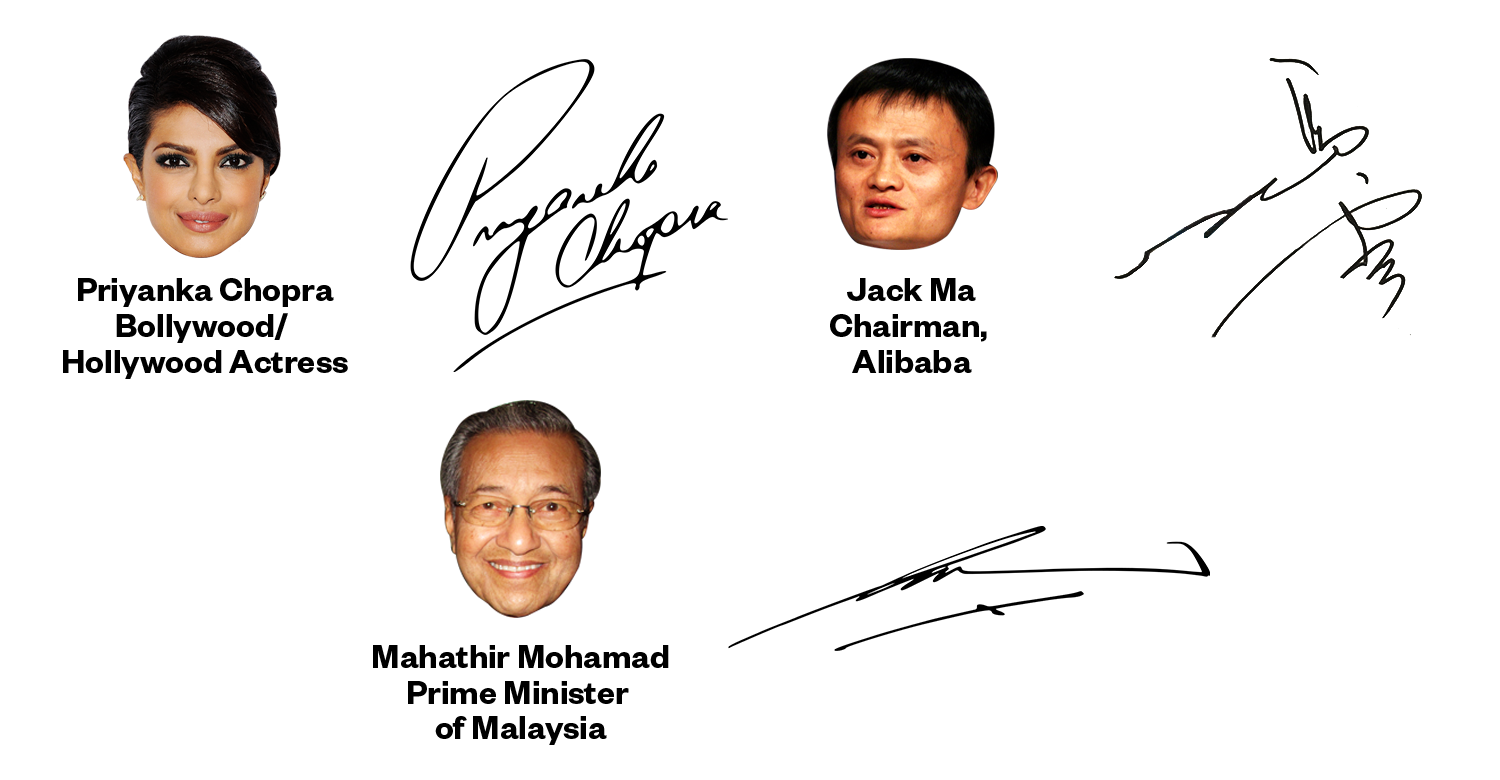 Legibility – This subconsciously reveals the writer’s social attitudes and how they would like to be accepted or be received. A clear, straightforward signature with complete legibility shows a person who is open and comfortable enough to be accepted as who they are. This is often an attribute of leaders who want to be authentic in their personality and their public image.

That said, a signature which is illegible does not necessarily point towards bad handwriting, but possibly the writer’s sense of self-importance; almost to imply that “I need not explain who I am, because you should know.”

Direction and slant – These are good clues to the writer’s optimism and energy. A rightward slant is can often be found in the signature of a person who is more optimistic, with an outgoing personality.

JUNK: Which of our powerful Asians have the most powerful signatures?

Selina: Hassanal Bolkiah; Sultan of Brunei – His signature is big and broad, showing his confidence and status. It is difficult to make out his name, which hints that he may enjoy an aura of mystery around him and is careful with who he opens up to. 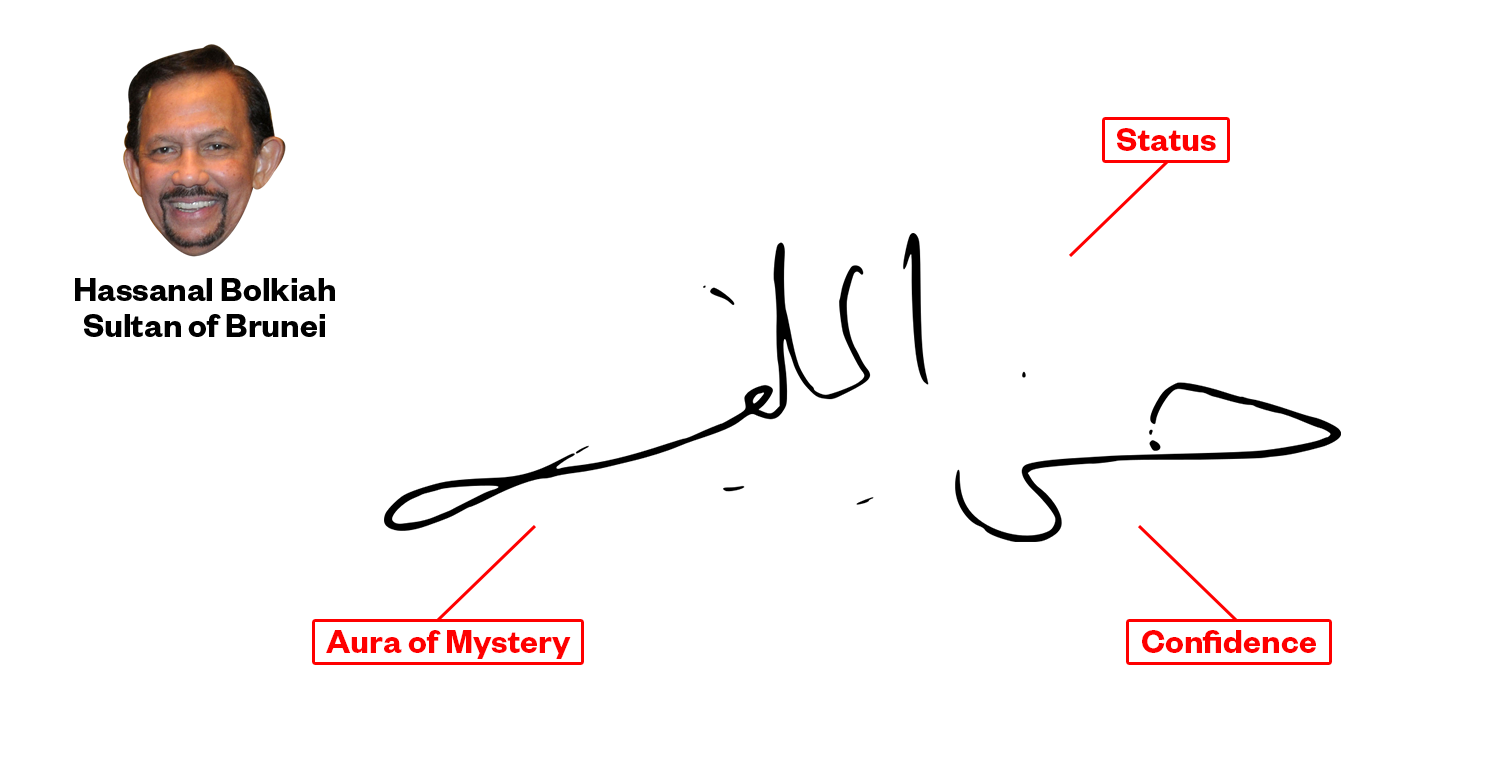 Haruhiko Kuroda; Governor, Bank of Japan – Both the English and Japanese versions show a very legible and clear signature. This displays the openness and sincerity of the writer, as if to say – “I have nothing to hide, I am what you see, and you can trust me.” The English version has a obvious rightward slant which embodies positivity and optimism, whilst the Japanese version is bigger in size but more centered which shows more authority and status. So here, the writer may feel he has to represent himself slightly differently towards different audiences, but what remains constant is his desire to be open and to show a high degree of integrity. 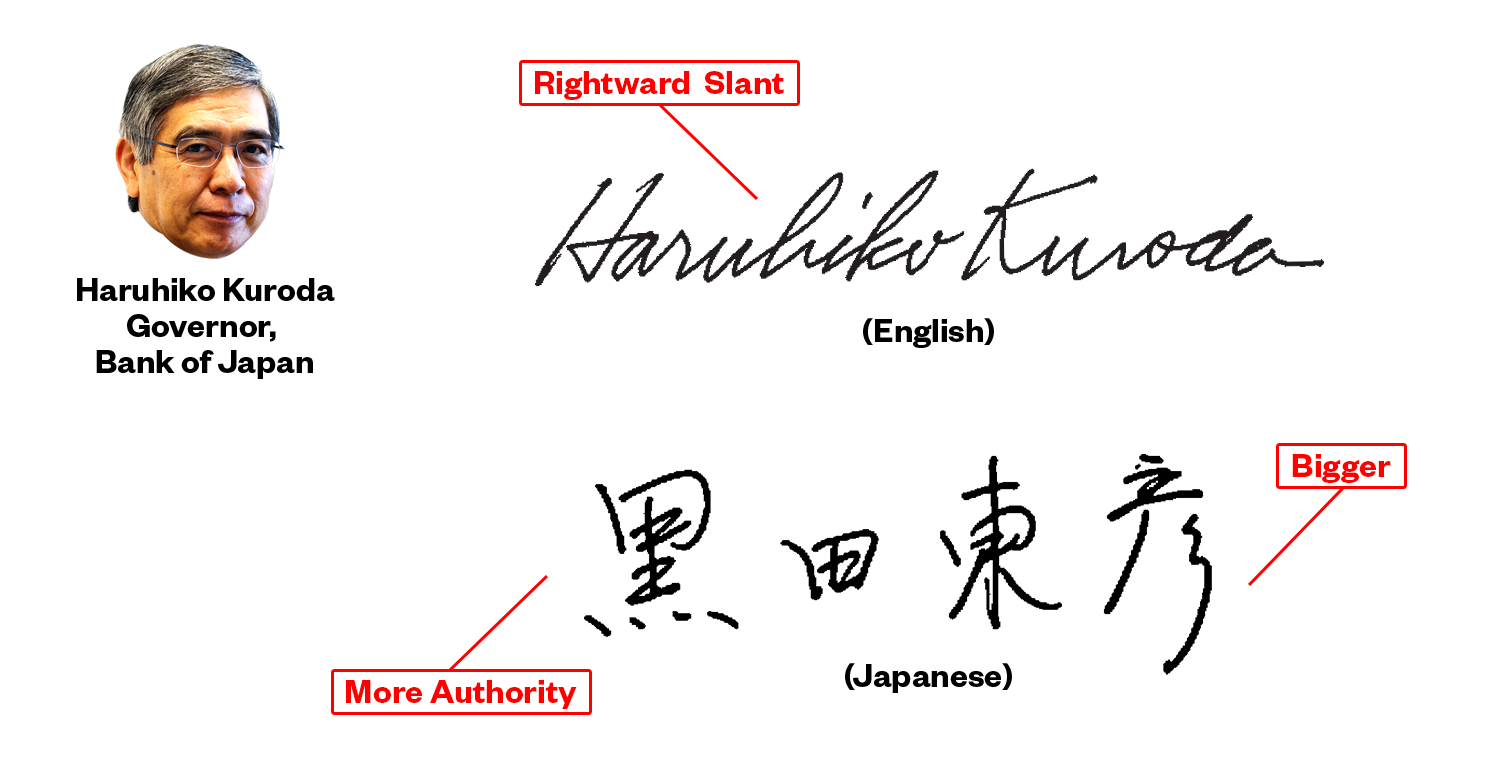 Xi Jinping; President of China – The writer’s signature is large which again shows status, power, and confidence. His name is not very legible, but still can be clearly recognised. So the writer is open with who he is, but is also clearly not too interested in trying hard to make an impression. It’s like “ I am who I am, and it’s your job to know me, not the other way round.” The signature is slightly slanted to the right but very clearly rooted in the middle, showing the writer’s need for attention and importance but also someone who is optimistic. 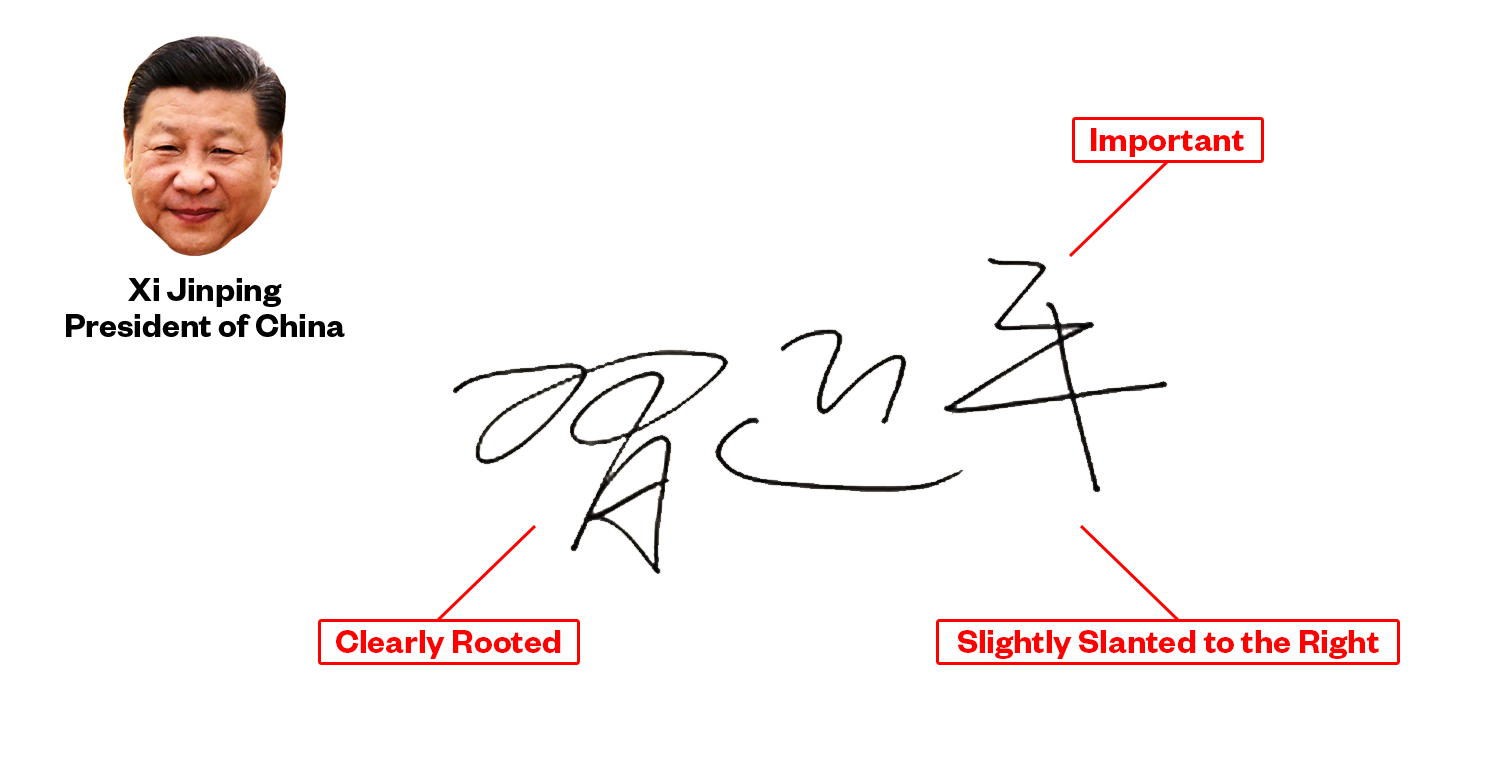 JUNK: What other interesting similarities or patterns do you note?

Selina: It’s interesting to note that almost all the celebrities in this list – such as Michelle Yeoh, Aishwarya Rai, and BTS – have signatures that show creativity and a desire to be seen as a public figure.

Embellishments that are added to a signature are subtle signs that the writer is attempting to draw more attention to their presence. For instance, a much bigger letter in a signature often indicates the need to show more importance. In instances where the first letter of the signature appears significantly larger, that shows that the writer’s need for a good first impression is very important. Notable embellishments like a smiley face, hearts, circles and so on express the desire to have a more “showy” image. 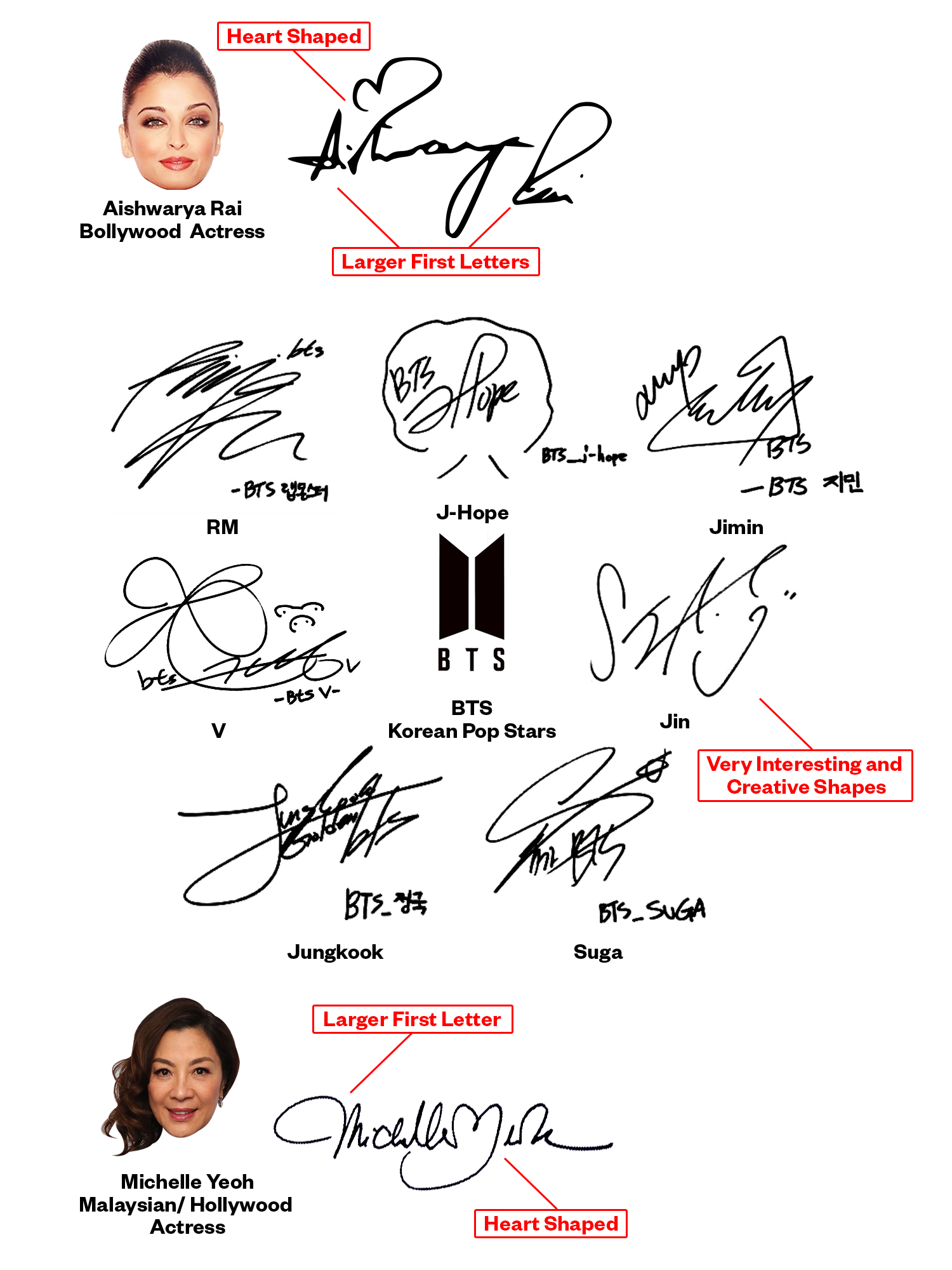 JUNK: Is there any particular signature that does not seem to match the power of the person who it belongs to?

Selina: I wouldn’t really say it doesn’t match, but there are some interesting things to note about the signature of Kim Jong Un.

It has a very unique simplicity and openness in it. While most “power” signatures begin with a stronger start, in this signature, the last strokes are more significant. The rising signature shows the writer’s energy and positiveness to the world around him, and the nice rightward slant also displays an outgoing and bubbly nature.

It’s not very legible, but at the same time, it is definitely not complicated. This shows that the writer is probably someone who will be guarded during the first meeting, and not willing to reveal too much, but when you come to know him, he can be open and friendly. 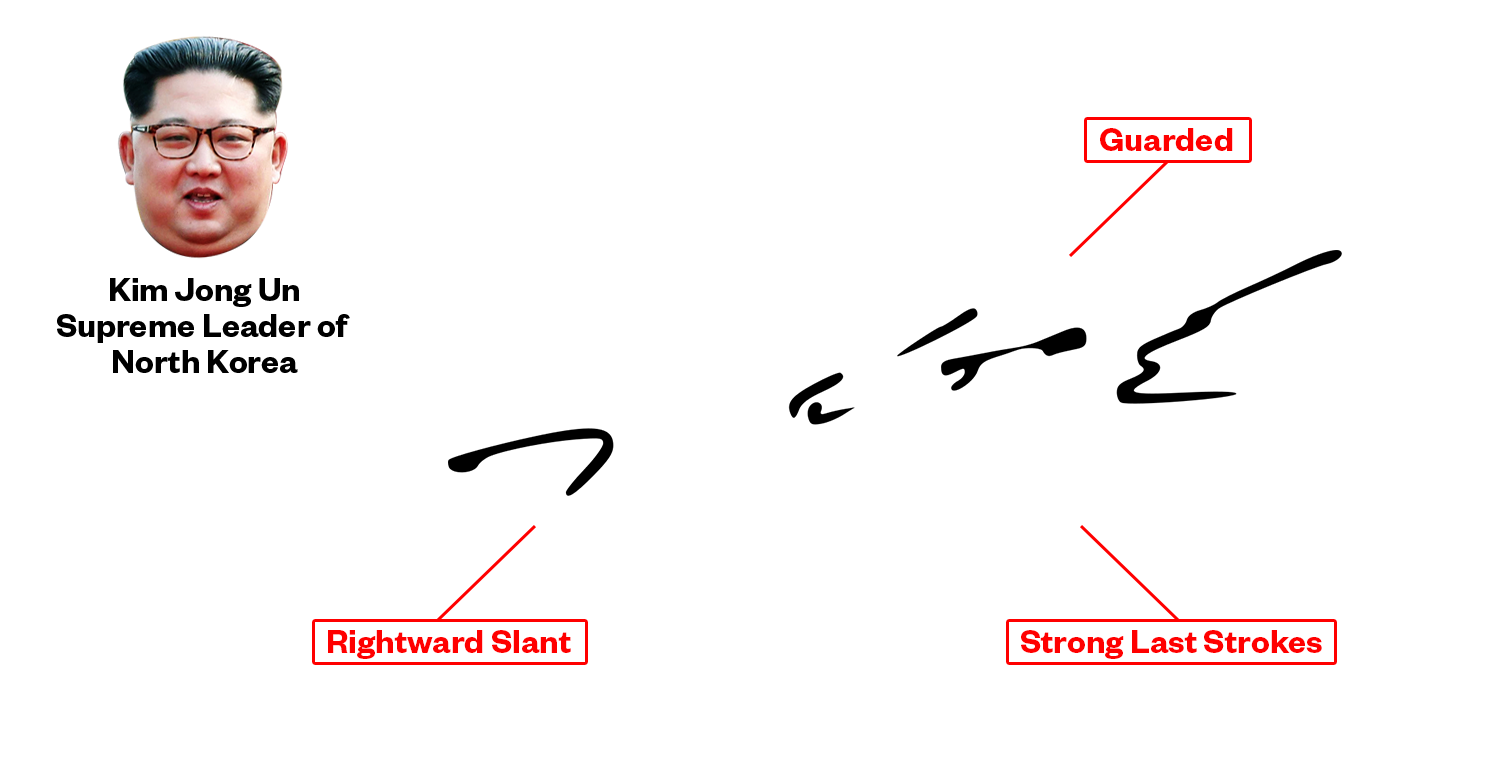 JUNK: Looking at these signatures, are there any tips that an ordinary person can apply to themselves?

Selina: Definitely. Our signatures represent us on all our important documents – contracts, bank documents, right up to our marriage certificates. A signature is your ‘logo’, your stamp of authenticity and, yes, power too.

What I realized is, most people have signatures that do not befit their identity and who they want to be. Think about it, for most people, their first signature is developed in their teenage years. I see so many people in their 40s, signing signatures that they created when they were 18 years old. What would their mindset, confidence level and maturity have been like at 18? It’s no surprise that, at 40, their signature does not embody their true spirit and the attitude of who they are now, as compared to who they were years ago.

So, the first thing I would say is to think about who you are, and what you want to communicate to the world about YOU. Generally, I would not recommend signatures to be too complicated or cluttered. Many clients have super-complicated signatures – perhaps not wanting to have their signatures easily forged. While your signature should be unique to you, it really doesn’t have to be heavy with too much clutter and complicated lines and curls.

That said, I do not encourage signatures to look like initials either. Remember, your signature is a what represents you. In life it’s important to wake up and show up, and you certainly want to make the effort to show up with your best efforts. I’ve seen signatures that do very little for the writer when they are just an alphabet or two. So it’s really about having a balanced signature that displays your ‘YOU’ on paper. “Y” for Yourself, “O” for Ownership and “U” for Unpretentious.