Rat, Snake, or Dragon baby? Self-made hustlers, or all in the family? 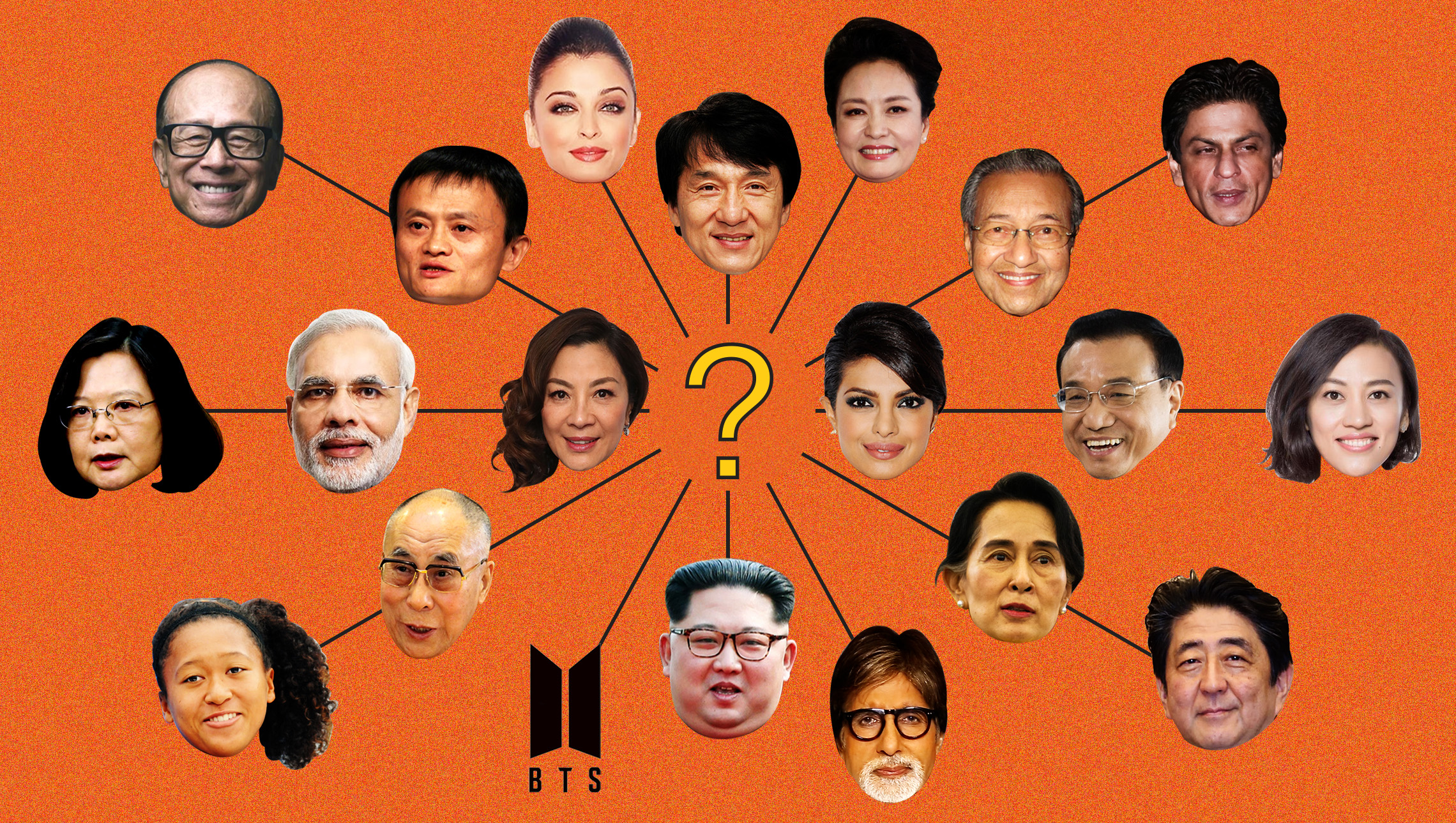 2018 truly was the year of Asian power. The world has borne witness to the meteoric rise of Crazy Rich Asians, the insidious wide-reaching tendrils of the 1MDB saga and the heart-warming-nuke-disarming tale of Trump and Kim. All in one year. And that’s only the tip of the Asian power iceberg. We’ve also seen Korean boy band BTS address the United Nations General Assembly, Xi Jinping go head to head with America in a massive trade war and Mahathir Mohamad stage the comeback of the century. Asians have never been so powerful since the Mongol Empire. With the spotlight shining so brightly on the continent, we wondered…

If we drew a portrait of Asian power in 2018, what would it look like? Where would he/she come from? What kind of smile would they have? What kind of astrological sign?

Presenting, A Portrait of Asian power: A JUNK Experiment

To construct our Frankensteinian vision of Asia’s Most Powerful, we built a dream team of the 50 most powerful Asians from lists like Forbes’ World’s Most Powerful People and Time’s 100 Most Influential People.

Because power comes in many forms – political power, economic power, star power, nuclear power – we included powerful individuals across a spectrum of different realms and industries.

Listed alphabetically.
Hover over the images for occupations. 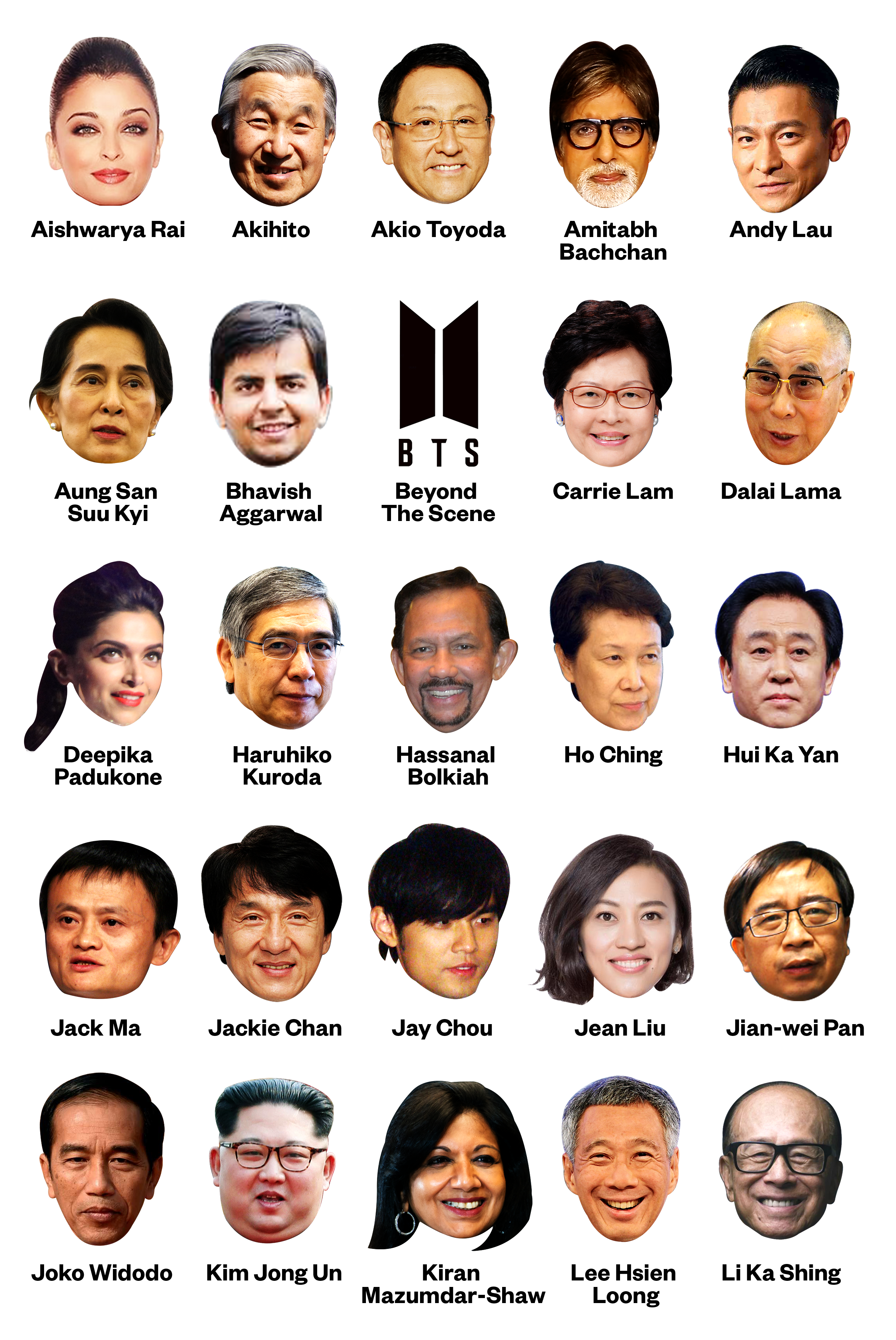 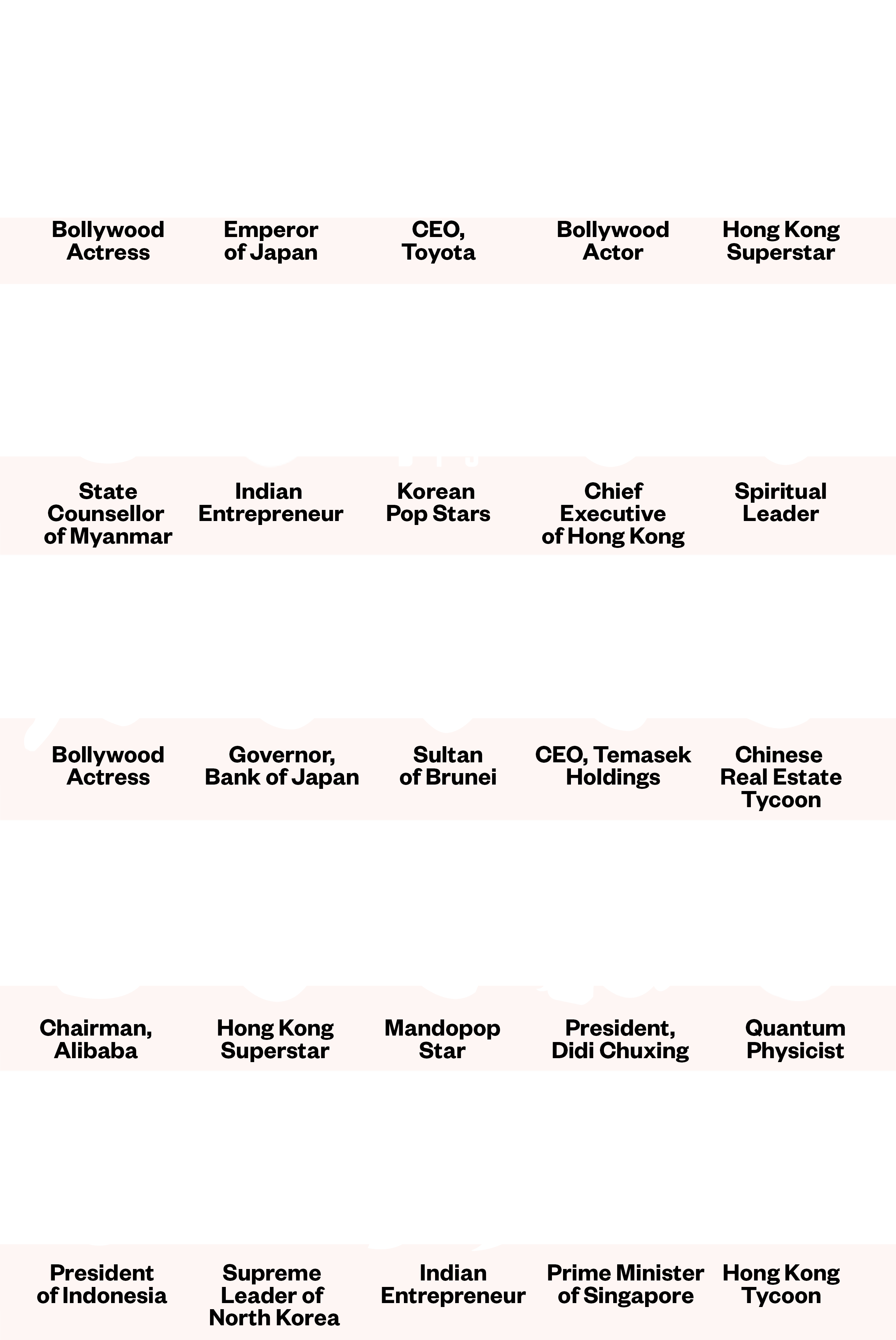 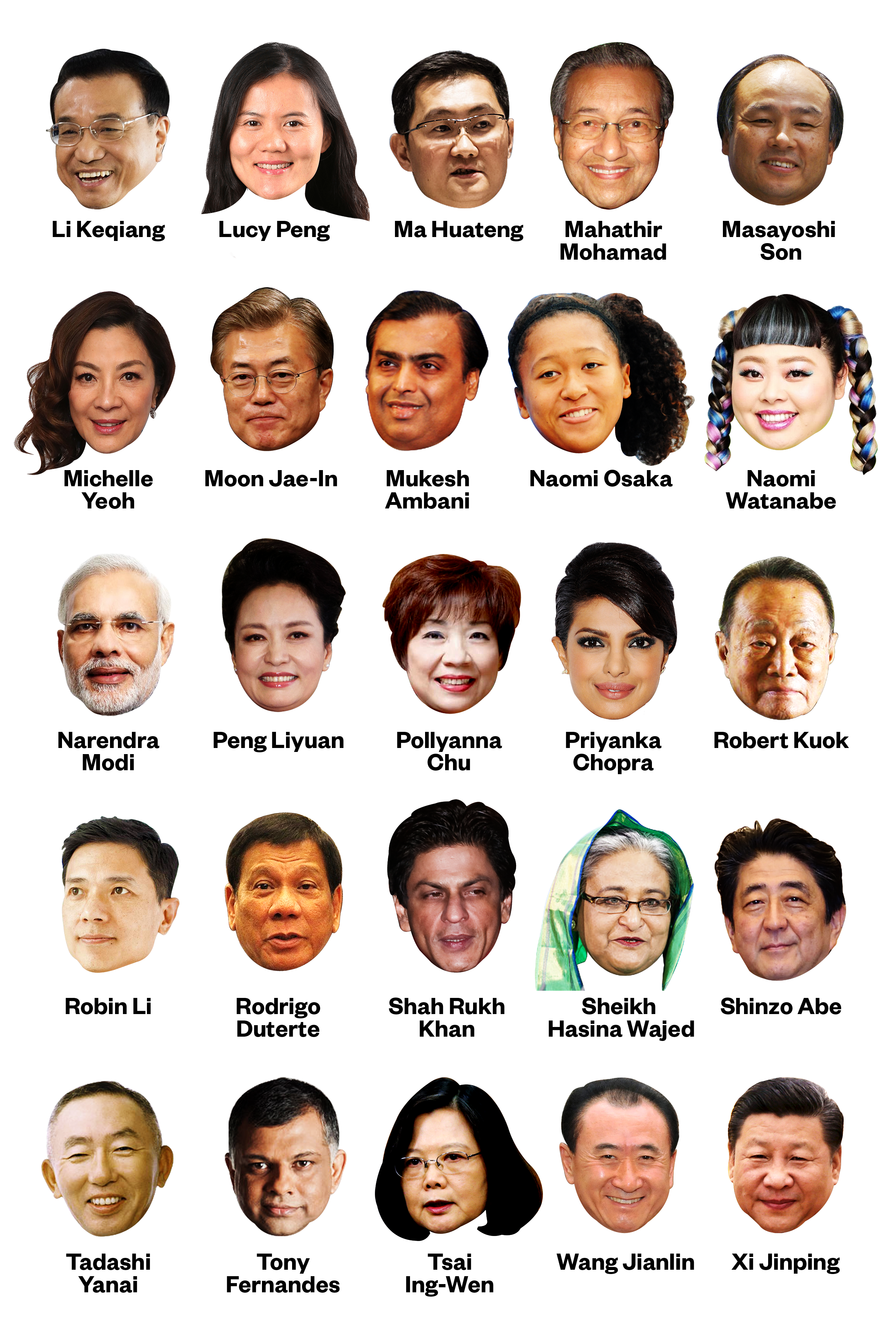 There’s more to Asia’s Most Powerful than just their social media followings, executive powers, and shiny bank accounts. Beyond those usual metrics of power, what are the qualities they share that make them so powerful?

We dive a little deeper to investigate. With a population of more than 1.4 billion people, it shouldn’t surprise anyone that the bulk of powerful Asians hail from the Greater China region. China and Hong Kong are (literally) rich with business magnates such as Jack Ma, Li Ka-Shing, Jean Liu and Lucy Peng.

Thanks to the huge amounts of wealth being generated by China, Asia became home to the world’s largest number of billionaires for the first time ever in 2017. According to Forbes, Asia makes one billionaire every other day, with China contributing two new members of the billion-dollar club every week.

Hong Kong, in particular, is home to a huge concentration of mega-rich – even more than New York City. It’s reported that 1 in 7 Hong Kongers is a millionaire, meaning you probably can’t throw a stone in the city without hitting a millionaire. 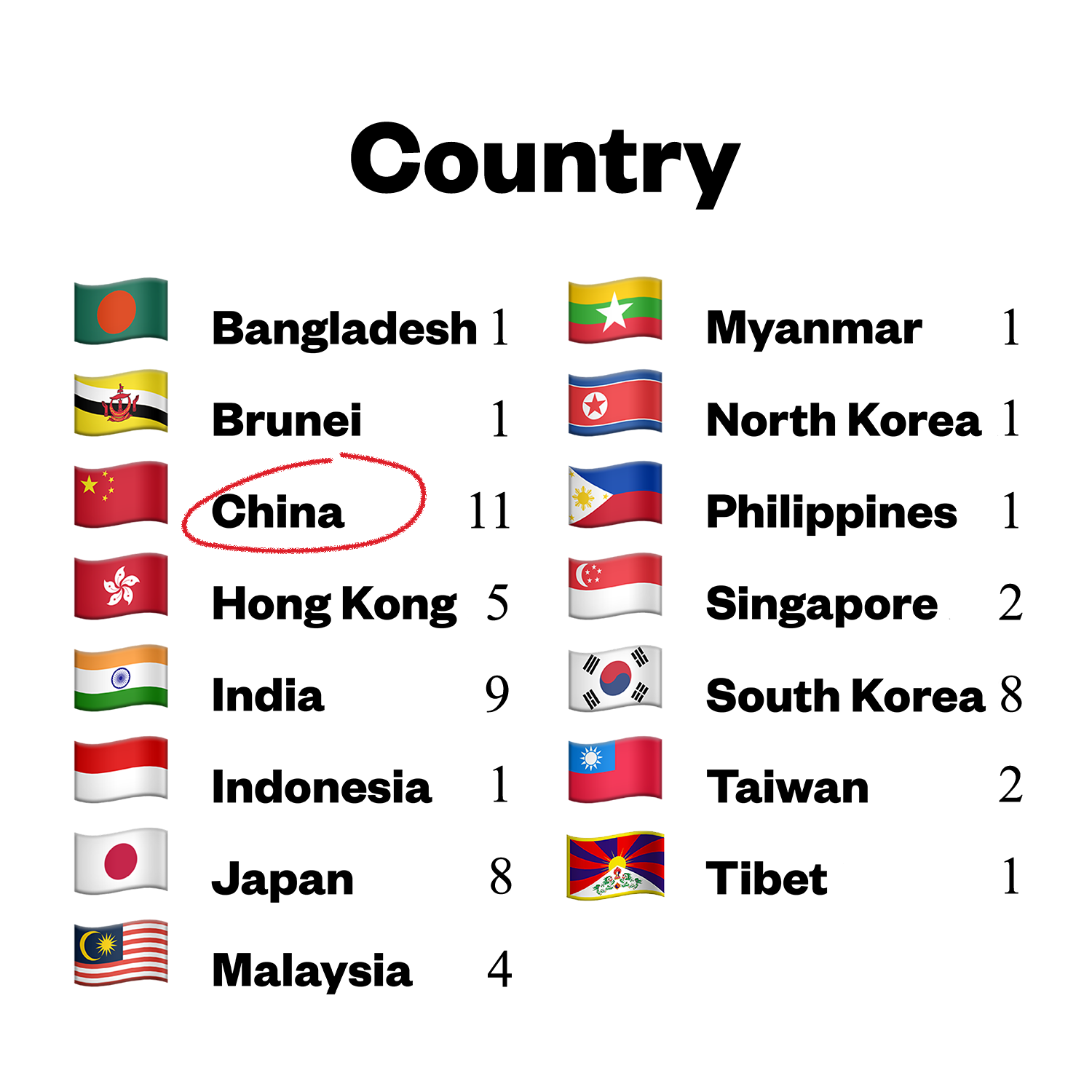 East Asia’s tally of 17 isn’t something to be scoffed at either. Home to Japan, North and South Korea, the trifecta of countries ooze soft (and nuclear) power.

The Korean peninsula has had a particularly huge year – in the span of a few months, Kim Jong Un went from “rocket man” to the object of Donald Trump’s “beautiful” love letters. In the South, president Moon Jae-In didn’t have a shabby year, but the South Koreans of the Year have to be K-pop powerhouse BTS – from a sold out U.S. tour, to covering TIME magazine, to speaking at the U.N., and flossing all over Jimmy Fallon, they’ve proved that K-pop’s global cultural dominance can’t be denied.

Speaking of cultural dominance – notably, half of South Asia’s powerful are Bollywood stars, and while you may think that we’ve gone overboard, we’d like to point out that India has a population of 1.3 billion, making South Asian stars some of the most influential in the world. Watch this space, because T-series vs. Pewdiepie is just the beginning.

Most of our powerful Asians are married men over the age of 40, which we attribute this to the 20th century’s unfortunate history of patriarchy. The good news is that China’s already home to the world’s highest number of self-made female billionaires, so hopefully it’s a sign that this metric will soon develop more evenly. Also, while ‘keeping it in the family’ seems to work wonders in Western families (think the Waltons, Vanderbilts, Rothchilds and Rockefellers), it seems that inherited wealth doesn’t necessarily translate directly into Asian power. Sure, Asia might have plenty of Crazy Rich Asians driving daddy’s cars on their grandfather’s roads, but for the most part, the regions top power-holders #startedfromthebottom, now they’re here. 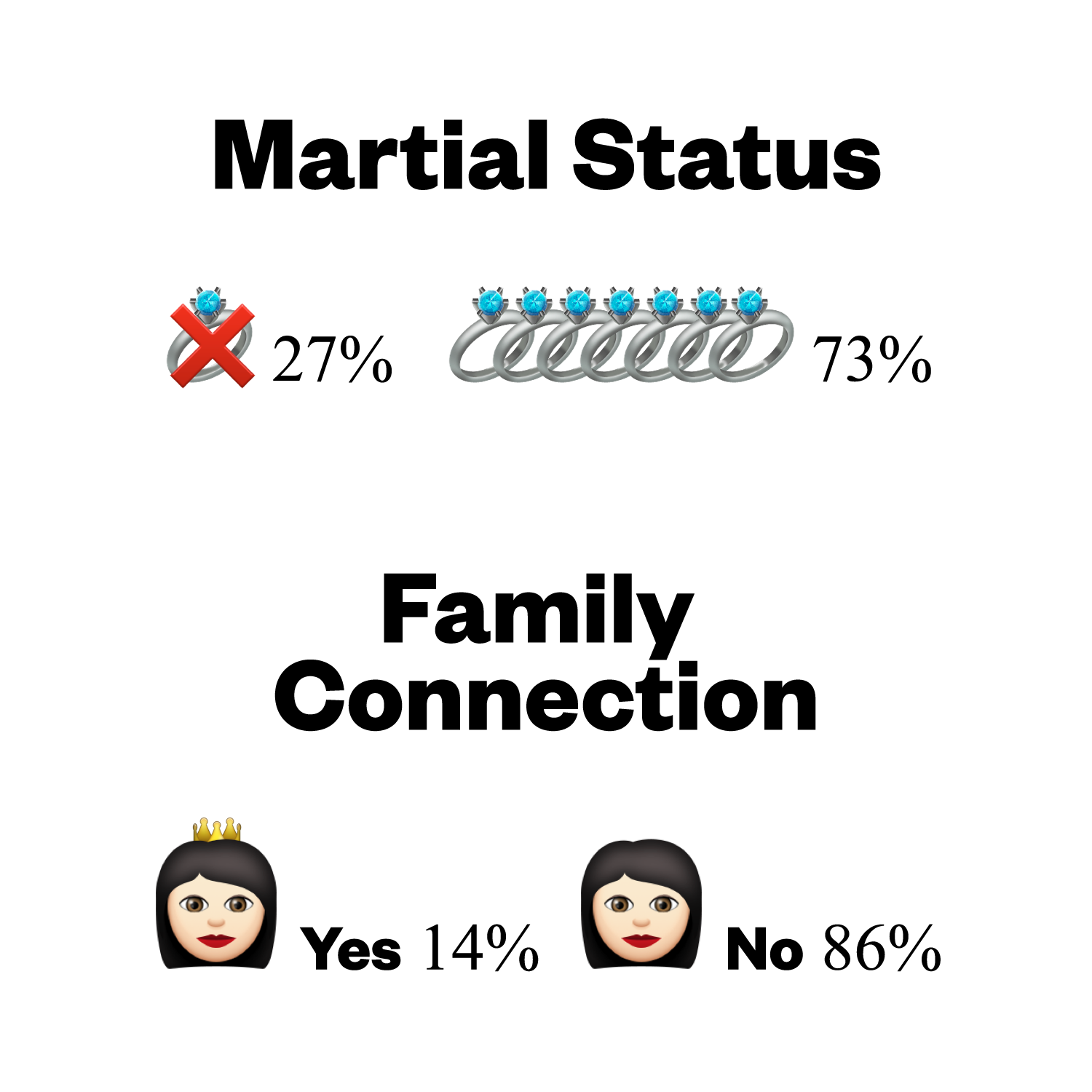 No portrait of Asian power would be complete without some super-scientific facial analysis.

You may blink in disbelief at the idea that a mere skin fold could play an integral part to being powerful, but Asia seems to believe it does, so we took it seriously too.

Turns out, there are more double-eyelidded peeps on our list of powerful Asians than not – and maybe there is a scientific reason why. Since attractive people feel powerful, and double eyelids are perceived as more attractive, therefore, it is reasonable to suppose that people with double eyelids feel powerful. And we all know that confidence is key. 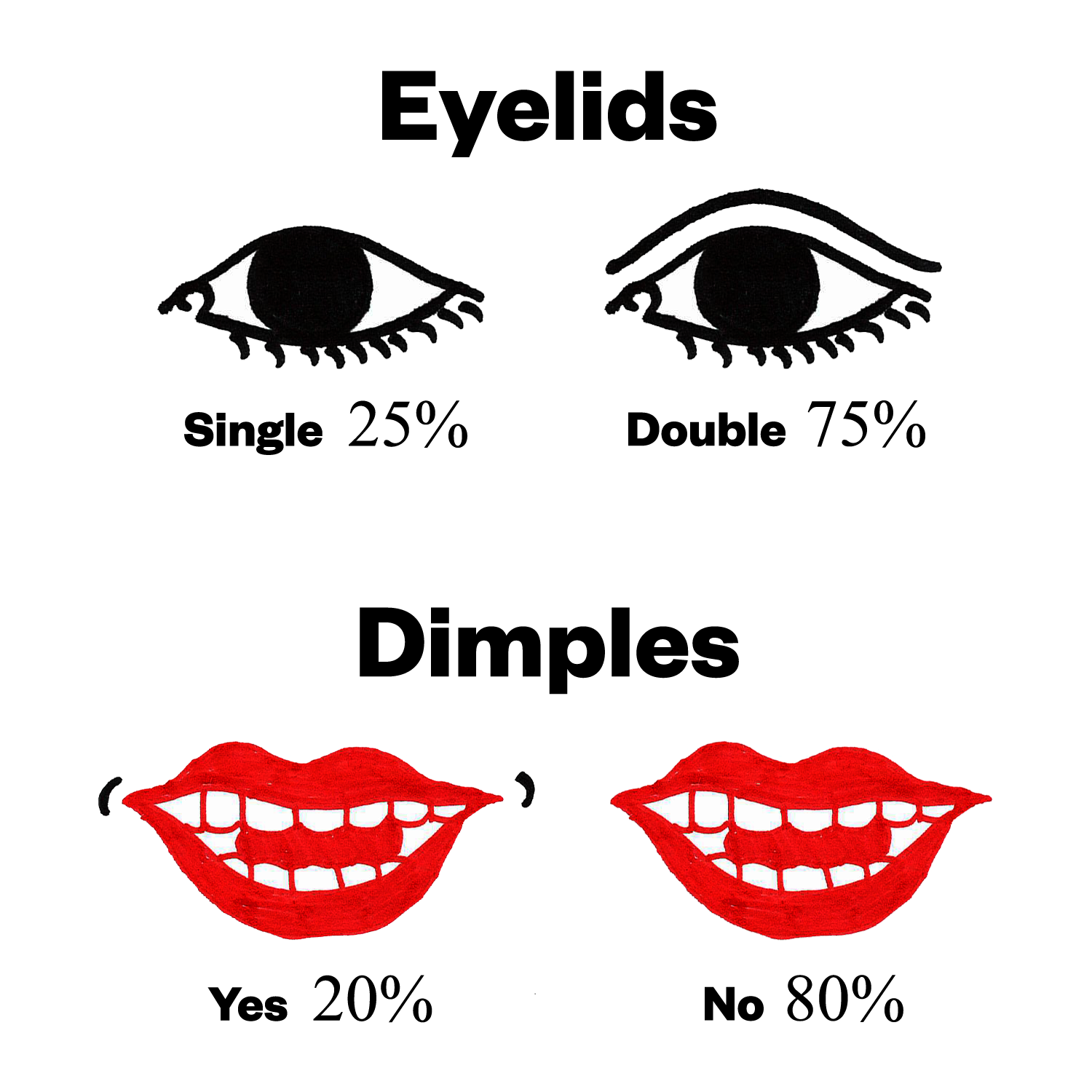 By the same logic, there should be more people with dimples on the list, since dimples are a conventionally attractive feature. But turns out, there aren’t. We don’t really know why, but maybe it’s because dimples make us look cute and baby-like. And as we’ve seen above, in the realm of power, youth is not an advantage.

If you want power, tough luck if you have a permanent resting bitch face, because it seems like having a friendly face helps. It also turns out that maybe people with shorter, less complicated names are more powerful than those with long names. We’d like to think maybe it’s because you’re always accessible. Or at least your name is. 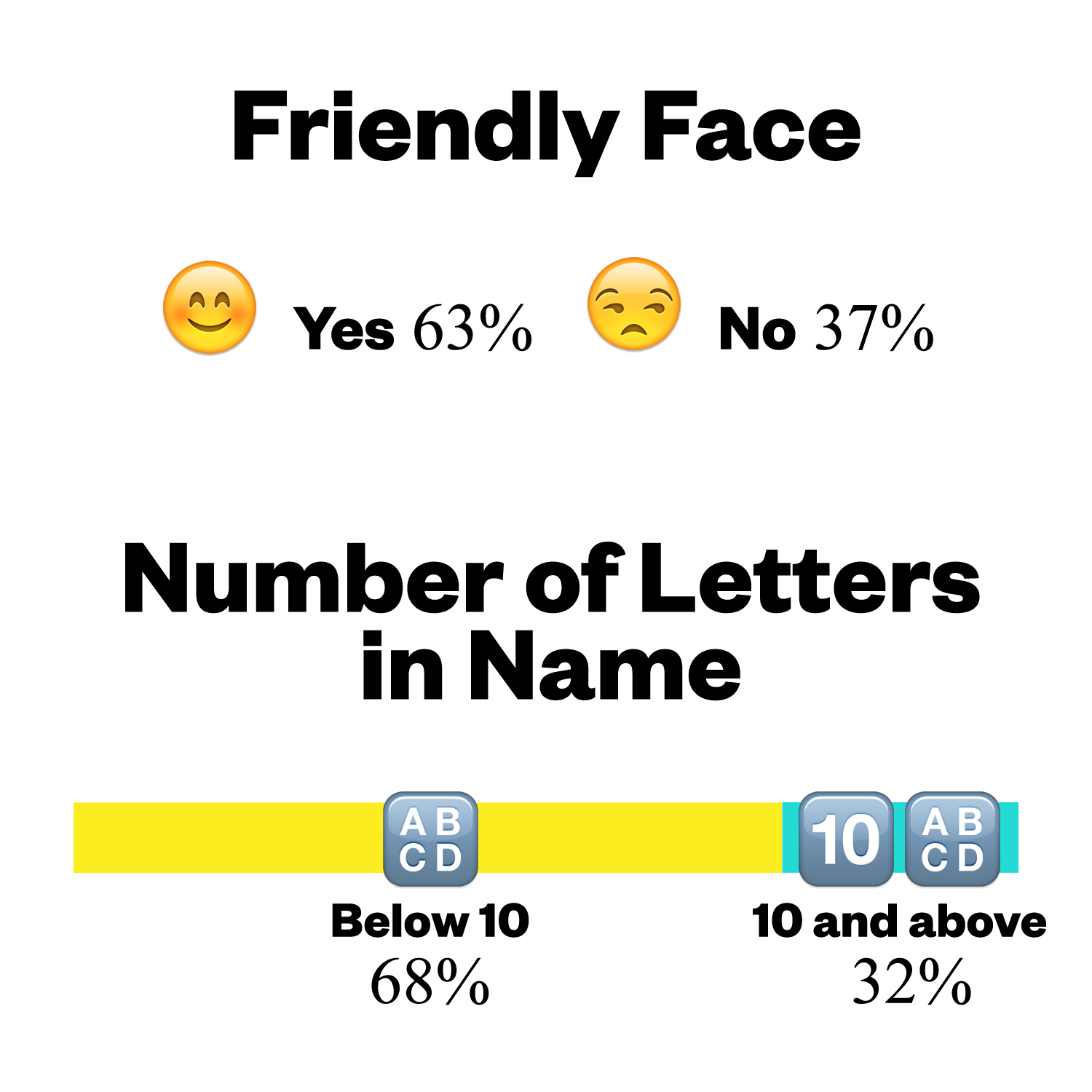 Time for pseudo-science! Are dragons really the most powerful of the Zodiac signs? What about those born under the stubborn sign of Taurus? Or those from the intense house of Scorpio? Which sign reigns supreme? 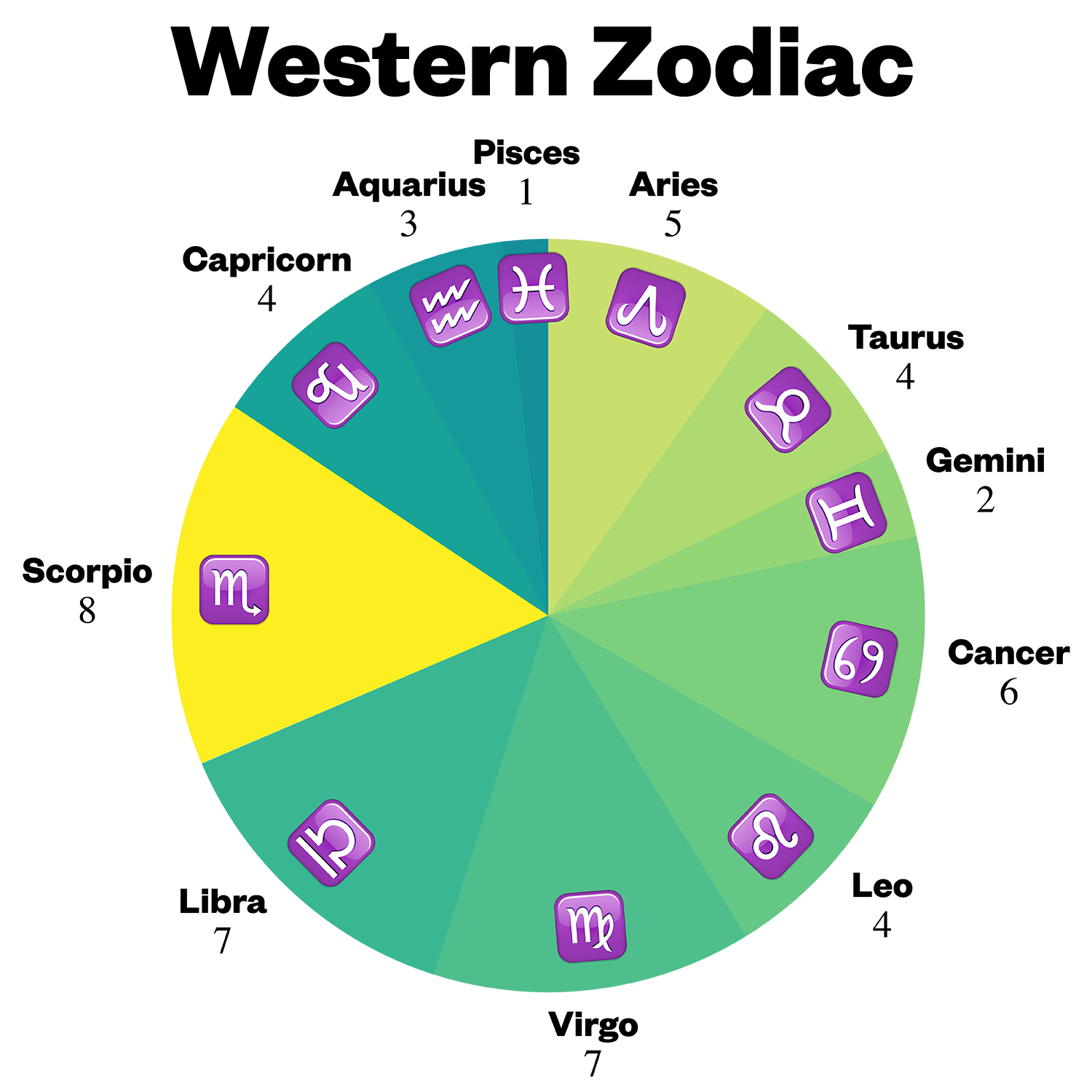 At first glance, it seems as though the signs are pretty evenly split. Librans are the diplomats of the astrological signs, so no surprises that they’re well represented amongst the powerful. The Virgo sign is notorious for its perfectionism – its easy to see how leaders require that trait. But Scorpio just edges out Libra and Virgo for the top spot. Could it be because Scorpios are passionate, ambitious and assertive?

Sagittarius readers will also realise that they’re completely unrepresented in our list of powerful Asians. We can kind of see why. Freedom-loving, introspective and idealistic are great traits in a person, but they don’t necessarily spell out a recipe for power. 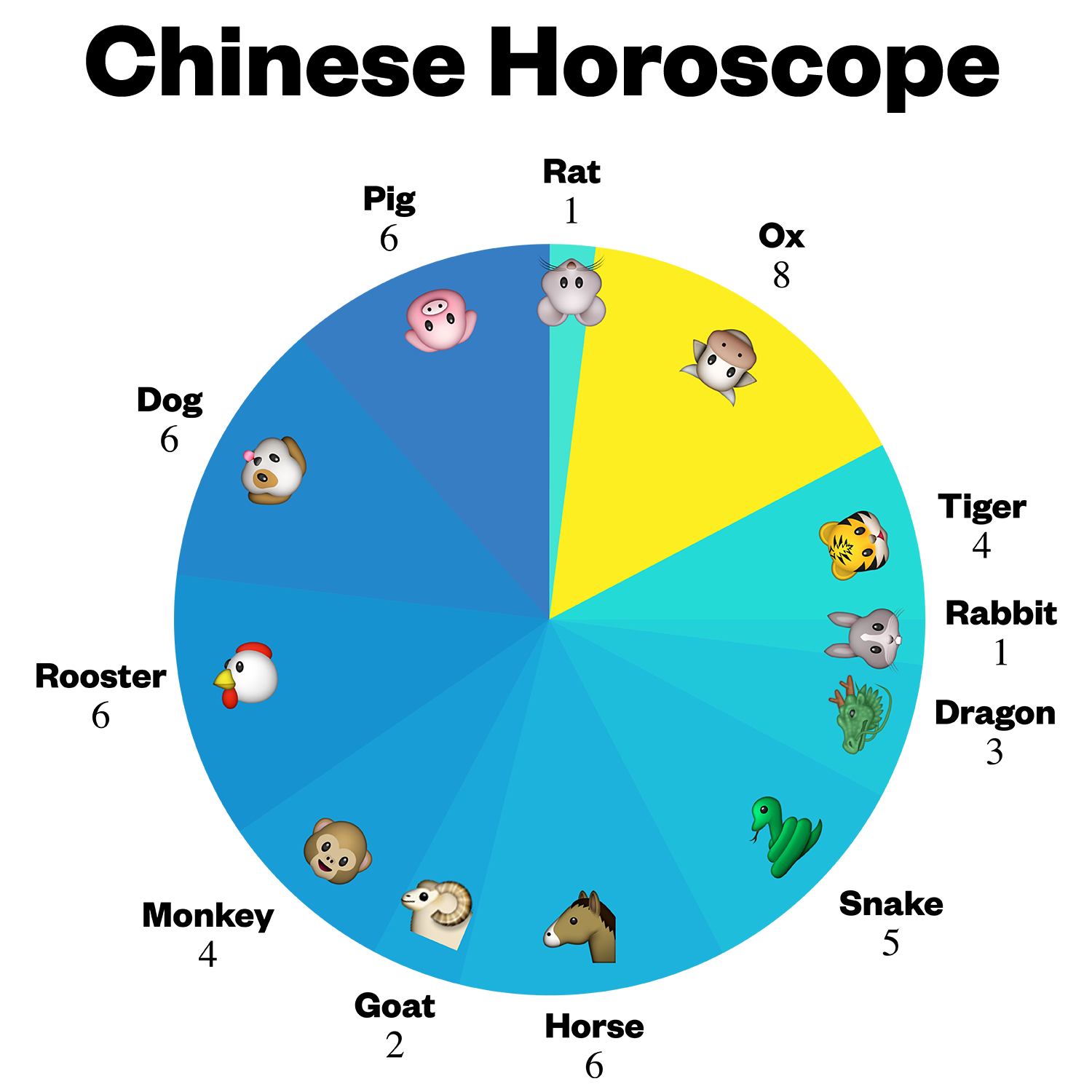 The Chinese Zodiac is slightly more inclusive, with all 12 animals of the Chinese Zodiac finding their way onto our list. Horse, Rooster, Dog and Pig are all fairly well-represented, but the most powerful animal on our list is the Ox. Maybe there is some truth to being “as strong as an ox” after all?

Despite coming in first in the Jade Emperor’s celestial race, Rat lands a sad last place, along with Rabbit. Surprisingly, Dragons don’t crack the top six, indicating that perhaps all the superstition about how the luck and power of Dragon-year babies is just hot air, after all.

A PORTRAIT OF ASIAN POWER

And if you want to create your own Powerful Asian...

… here are some tips:

1. Go into a copulating frenzy in February 2020. Your child will most likely be conceived as a Scorpio in the Year of the Ox.

2. The number of eyelids and dimple formation is hereditary. Find a partner that has both of these traits for maximum odds.

The gahmen doesn't have a clear plan. So here's ours.