Indonesians vs. Rappers – Who Wins at Weddings?

It's the Olympish games... of love

It’s the Olympish games! Where we compare non-Olympic things, on an international level. This week: love as a competitive sport (of the non-contact variety).

In this showdown, it isn’t just regular, run-of-the-mill weddings we’re looking at. It’s an epic clash of rappers – the original progenitors of the #baller lifestyle – vs. Indonesian sosialita – the upper-crust of Indonesian society. Prepare for outlandish frippery, frivolous expenditures, and so much bling that it’ll make your eyes roll into the back of your head. Moral of the story: in the game of competitive love, even the winners are kind of losers. 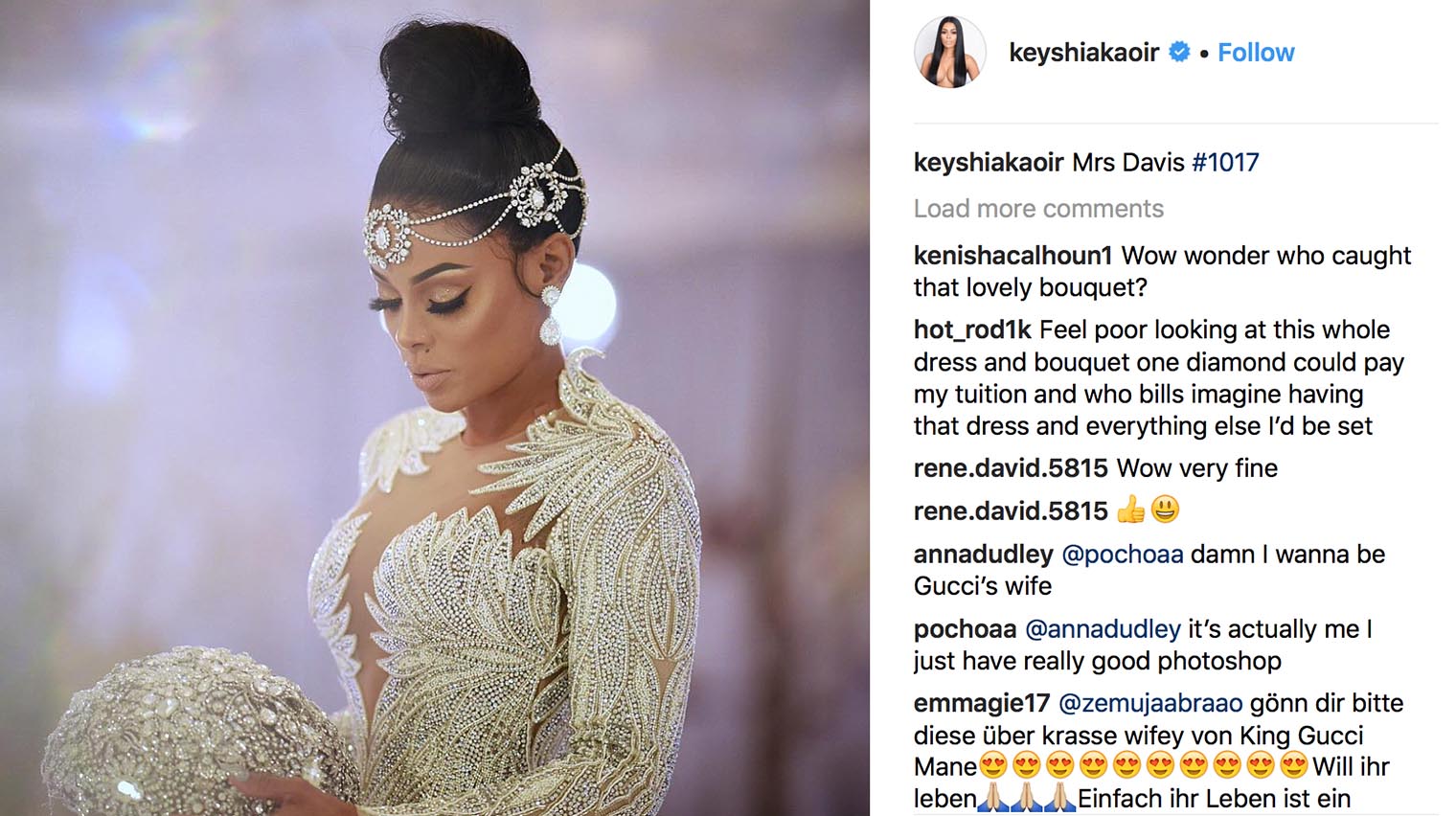 Last year, people flipped out when Gucci Mane got married in the flashy, fabulous style expected of a world-famous rapper. The Atlanta rhymer reportedly put no budget on this extravagant event, resulting in a US$1.7 million bill for a night that included an encrusted gown for Mrs. Gucci Mane that was provided by Lebanese couturier Charbel Zoe, and is estimated to cost upwards of US$14,000.

The look (and its price tag) is by no means shabby, and certainly befits hip-hop royalty, BUT Indonesia’s bridal finery game isn’t just about bedazzled dresses, it’s also about jaw-dropping traditional headgear too. Because it’s not really a royal-esque wedding day unless you’re wearing something on your head that leaves you with a headache. Didn’t you know comfort is for noobs and plebeians? 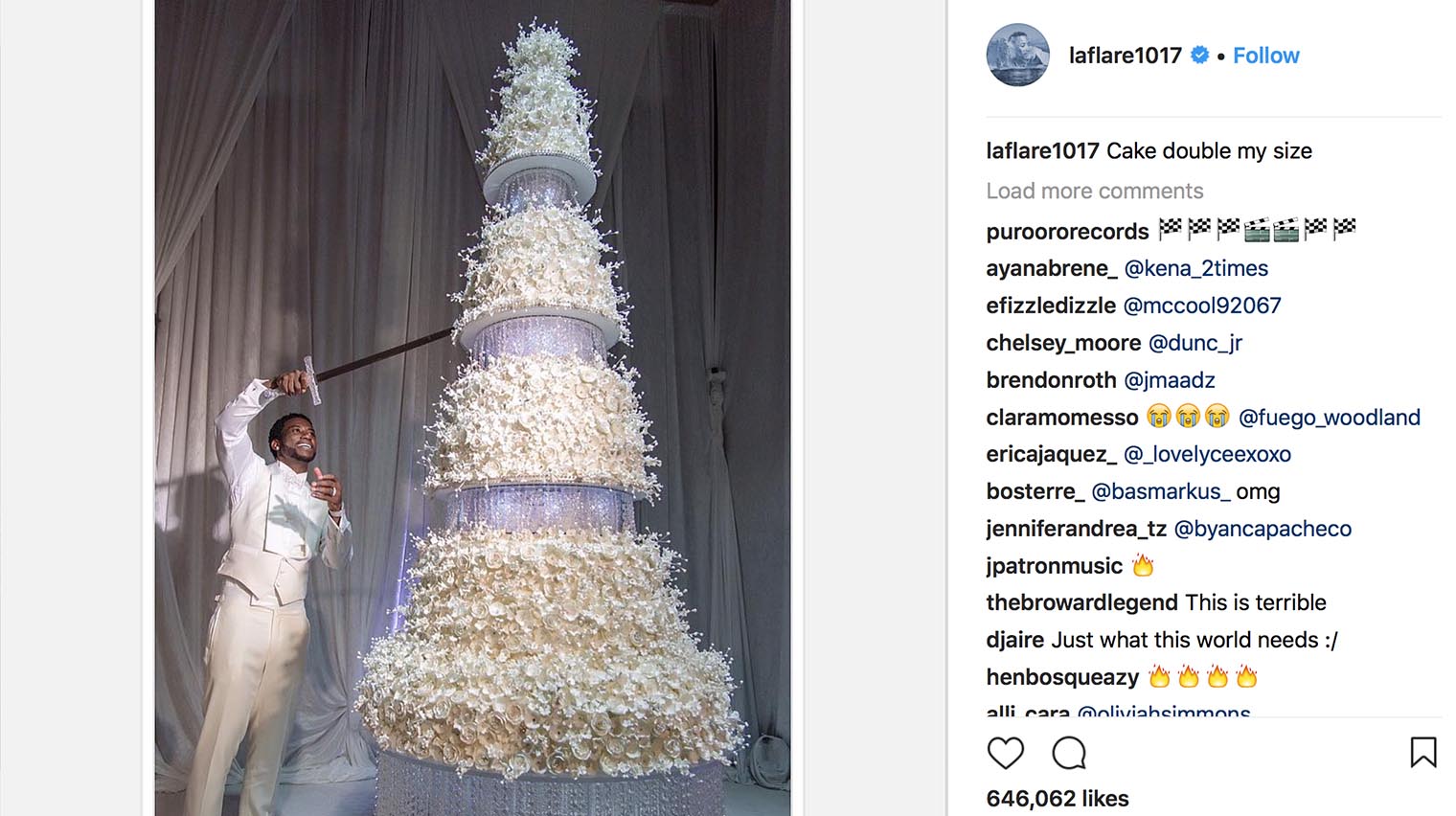 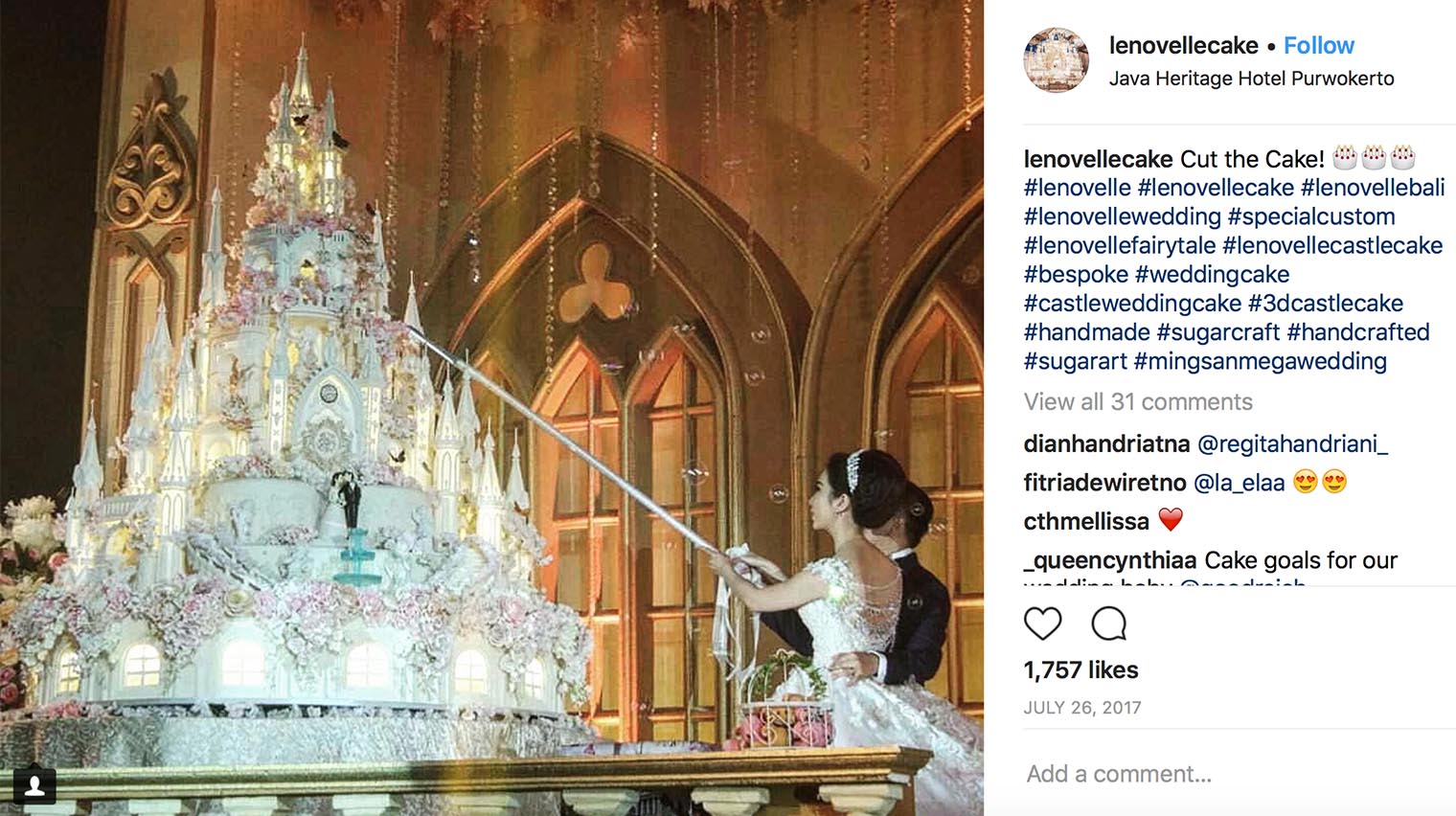 Gucci Mane’s impressively frosted fantasy included 8,000 handmade sugar flowers embellished with 2,500 Swarovski crystals. Standing at 10 feet, it was probably the only thing taller than the tallest NBA player in the room. It was so big, the artist occasionally known as Big Guwop required a sword to cut it.

But what is that in comparison with Jakarta’s 3D FAIRYTALE CASTLE CAKES? Le Nouvelle Cake makes some of Indonesian hi-so’s most in-demand wedding cakes, and these excessively elaborate edible extravaganzas can soar up to 7 metres (that’s 22 feet to you, Gucci Mane). No mere sword can handle one of these marvellous monstrosities; slicing into them requires something closer to a spear. A bedazzled spear. Kim and Kanye’s wedding day smooch broke the Internet and racked up more than 2 million likes on Instagram. The creamy white floral wall that served as the backdrop didn’t do too badly either, inspiring countless imitators.

BUT, what is a wall of white flowers compared to an entire hall of flowers, chandeliers and other glittery doodads?!? Jakarta-based Lucky Dekor has an Instagram feed/portfolio that makes Kim’s fairytale setting look positively quaint and cosy by comparison. You want an epic backdrop for your True Love’s Kiss? Well then, how about a couple of massive clocks? Otherwise, nothing says grand quite like an immense onstage carousel. Or confetti canons! 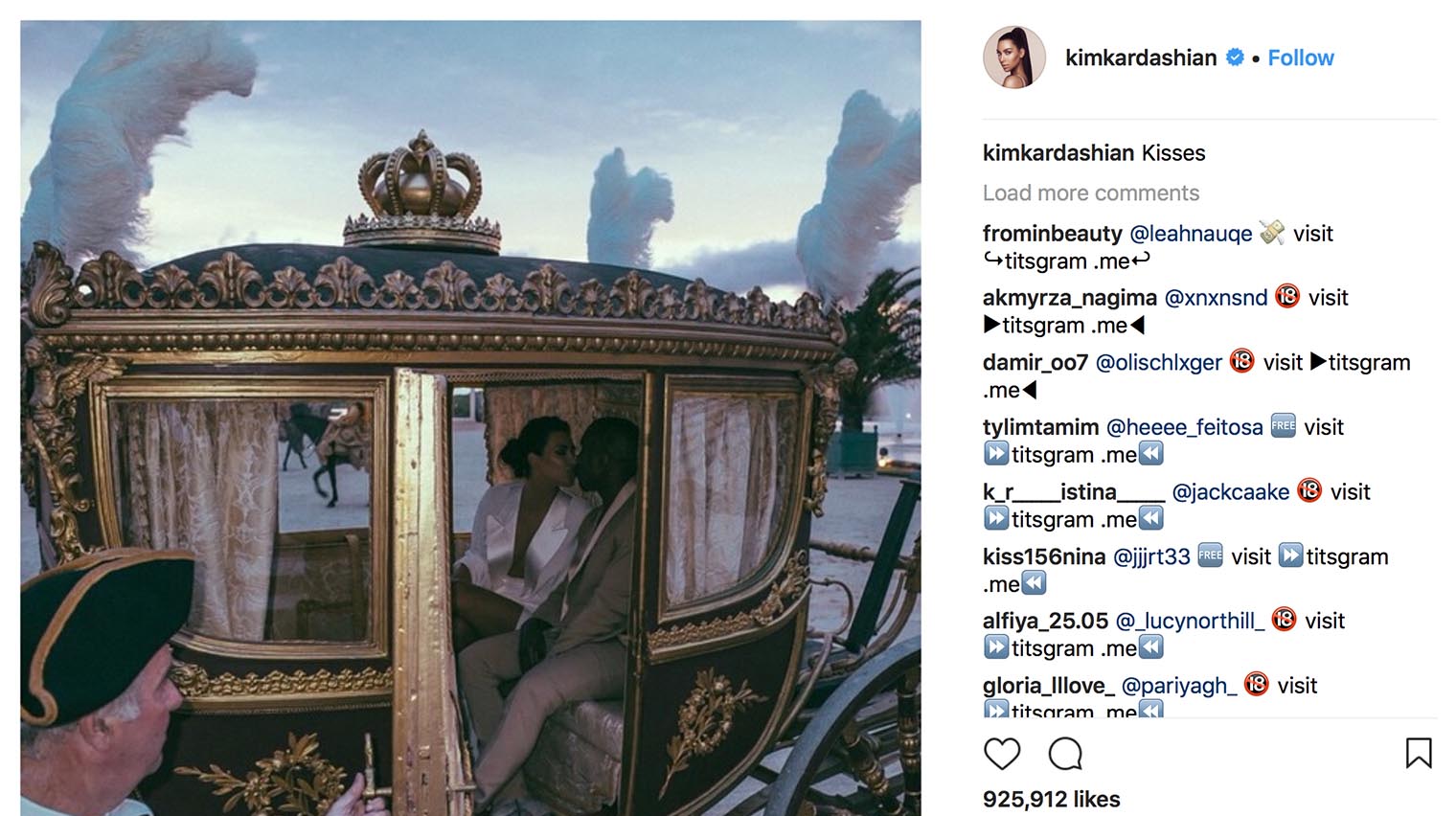 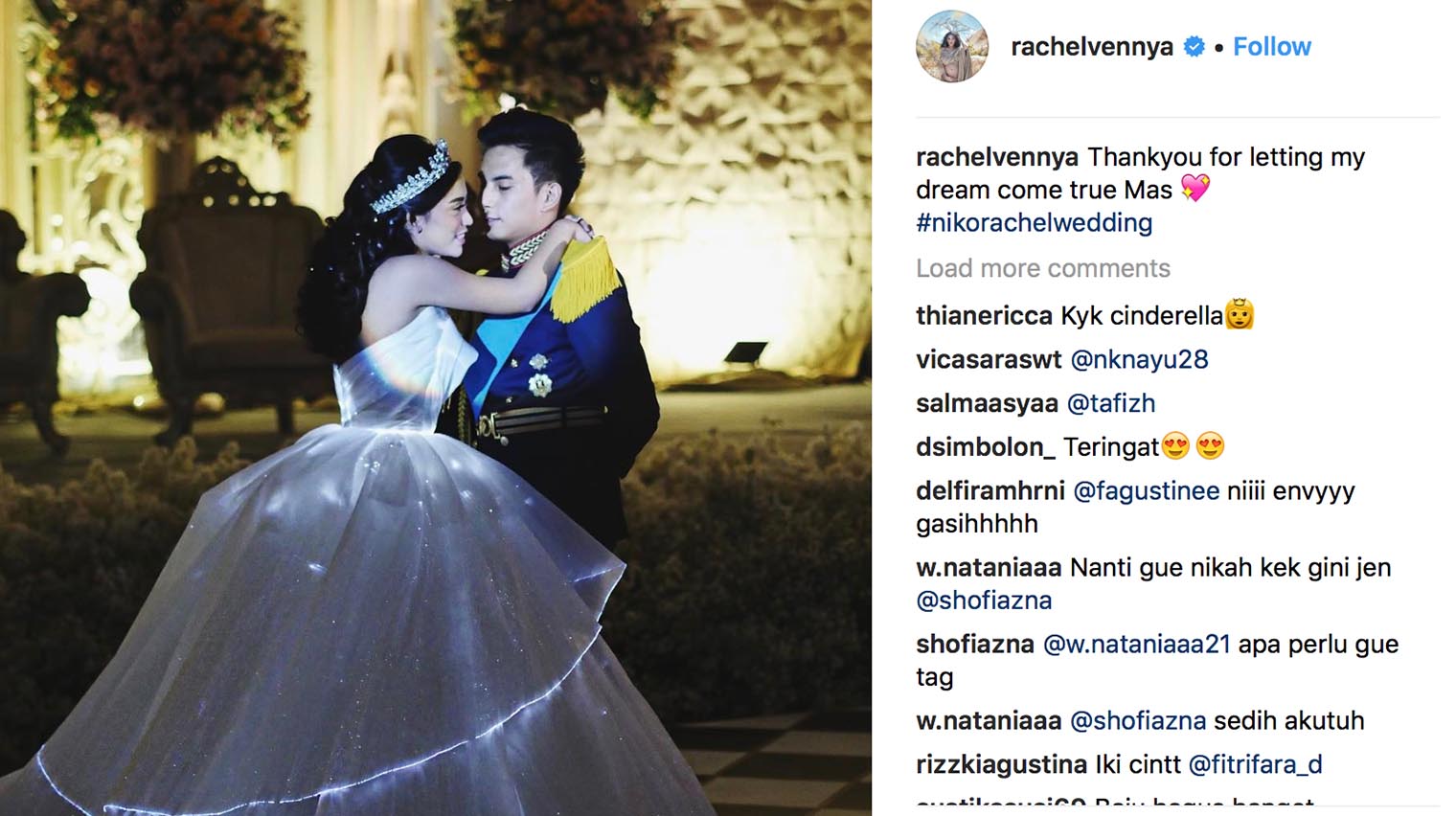 At Kimye’s pre-wedding party, the duo rocked up to the palatial venue (Versailles, ahem) in a befittingly royal style: a gilded carriage, complete with silken upholstery and footman. What an entrance, you say! Totally grandiose and 100 percent on par with a six year-old girl’s fairytale dreams of bridal bliss, right? Extravagance? Thy name is Kimye!

BUT Kim and Kanye’s royal carriage might as well be a donkey cart compared to the excesses of Indonesia’s rich and powerful. In early 2017, Rachel Vennya, one of Indonesia’s favourite Instagrammers, tied the knot with Niko Al-Hakim, a musician/purveyor of sate delights (not kidding). Like any good selebgram (that’s Bahasa Indonesia for social media influencer), Rachel’s Snow White-inspired wedding fantasy was captured in a glorious YouTube video for all to see.

The very word “wedding” seems too small to capture the surreal heights this epic event aspired to. The coterie of ballerinas and a massive 3D castle cake from Le Nouvelle Cake (of course) was just the beginning of this insane marital extravaganza: the interiors were straight out of Disney’s Magic Kingdom Cinderella Castle, down to the sky blue accents, plus there was a gazebo (and for some reason a massive gate) and everything was festooned in flowers. There were dancers dancing and crooners crooning; there was also a ball gown that LIGHTS UP like real-life CGI wizardry. (Was she packing batteries under her bustier? We want to know.)

But hands down the most excessive and questionable moment of this whole affair was the bride’s ENTRANCE. Rachel, wearing what must be the most expensive Snow White cosplay outfit ever, was wheeled down the aisle while seated in a lavish, floral-trimmed… something (because carriage is too provincial a term). Because it’s not really your wedding day unless you’re being literally dragged into a room by uncomfortable-looking men who are trying their best to look elegant but really this fucking carriage is snagging on everything and ugh whose idea was this anyway?

Rappers – NOTHING!
Indonesians – 1 gazillion to the power of infinity