These Cosmetic Millionaires Are Selling Poison

And they're making a ton of money doing it 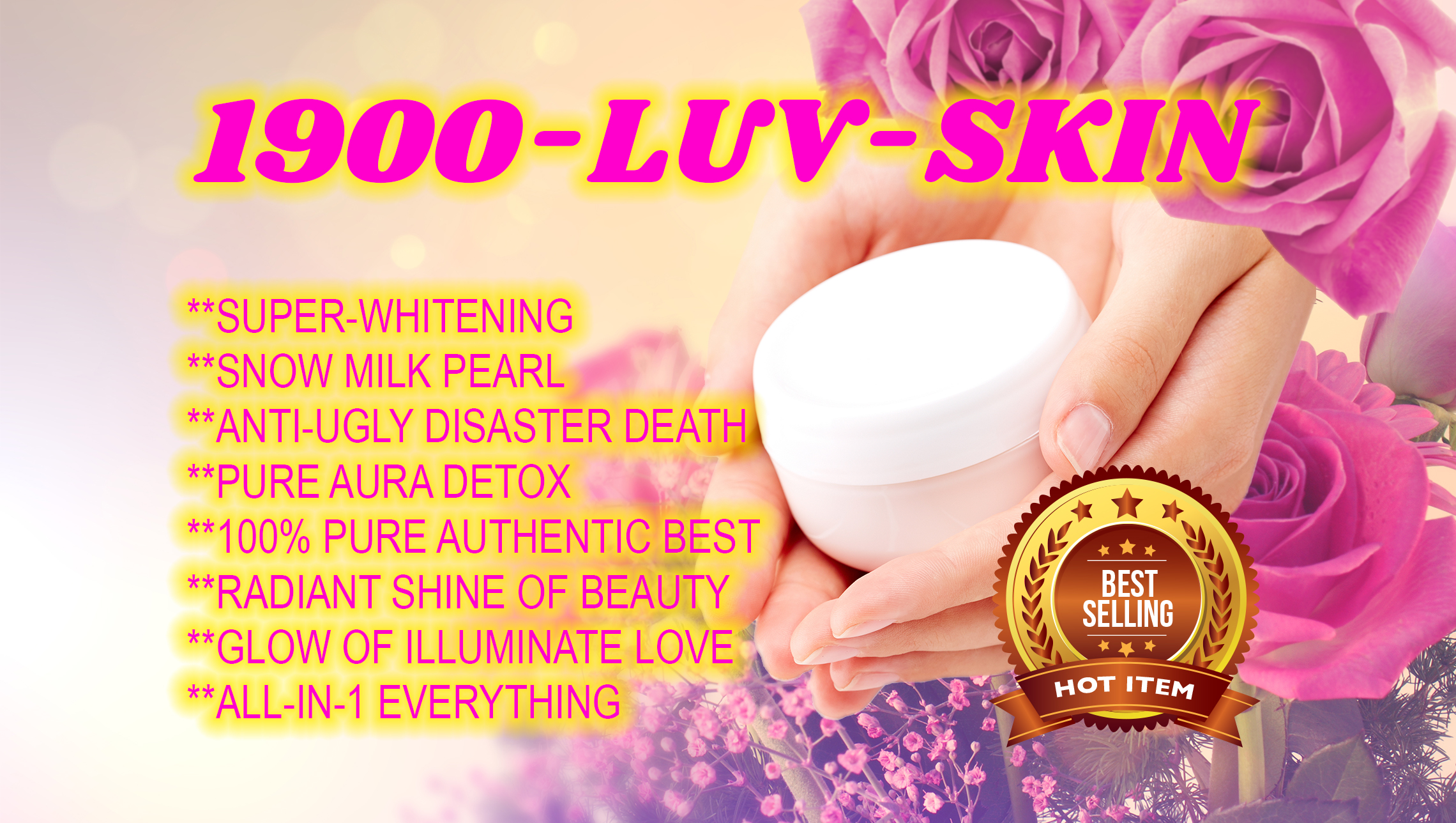 Meet the high-flying, low-balling cosmetic millionaires of Malaysia, who prove that whoever said that beauty starts on the inside was… wrong.

With a population of 30 million people, Malaysia isn’t short of tycoons who have built their empires selling stuff within the country’s domestic market. There is “sugar king” Robert Kuok, construction magnate Yeoh Tiong Lay, timber baron Tiong Hew King, and now an emerging class of entrepreneurs striking it rich: those known as “jutawan kosmetik” or the cosmetic millionaires of Malaysia.

This nascent crew of millionaires are not just raking it in, they’re spending it too. Think casual shopping trips at Chopard for matching mummy-and-me watches, palatial estates, Lamborghinis left and right, etc. The flagrant displays of new wealth might qualify as entertaining in a Real Housewives kind of way, but when you realise how their lifestyles are funded by dodgy business practices, everything then just gets kind of ick.

Dato Aliff Syukri is the founder of D’Herbs, a Malaysian beauty behemoth that trades in everything from eyeliners to slimming supplements, corsets and, inexplicably, instant coffee. At D’Herbs, everything is healthy and everything is a best-seller. Just be aware that Dato Aliff’s relationship with the word “best-seller” is akin to Donald Trump’s relationship with the word “sad” – it’s more a catchphrase than an actual statement of fact. (Case-in-point: the man’s Instagram handle.)

Dato Aliff also likes to be known as “Abang Kosmetik”, and stars in his very own Kardashian-esque reality TV show “Oh Abang Kosmetik”. (And yes, it’s on YouTube.) The first episode posits Dato Aliff as a regular-Joe-made-good. He gets the kids up, tootles them over to school on a motorbike (the driver had dengue), and rustles up some nasi lemak for wifey and gang. The house might be filled with fancy Versailles-themed furniture, but the family sit on a floor mat to dine. It is all very cosy.

Later in the episode, Dato Aliff chairs a company meeting with his managers, and the kampung boy quickly morphs into the prototypical business leader, as he unhesitatingly gives one of his managers a dressing-down for failing to flag an inventory issue earlier. You are a reminded that this average Joe does run a company with a reported annual turnover of almost RM10 million.

Yes, there’s no doubt Dato Aliff is a sharp man who is incredibly savvy about his personal brand. Like all good influencers of the digital age, he knows that self-promotion isn’t narcissism, it’s marketing. Because when it comes down to it, there is no distinction between him and his brand:

“When people recognizes me [sic], they will try these D’Herbs products. My personality is my product and if I have 1.2 million followers on Facebook and Instagram, my products will become closer to consumers and customers.” Source: Shout!

There is definitely something quite charismatic about Dato Aliff. He is silly and, on some level, quite sincere in his superficiality. But in his world, “Marketing comes first, products second”. And that casual relationship with values like honesty and quality is what makes Dato Aliff hella dodgy. So dodgy that his company claims their raisins will make you cleverer. So dodgy that his company was fined for false advertising (how surprising). So dodgy that his brand’s own website quite openly disavows any relation to its own parent company.

Yup, that’s just a totally normal business practice, and not suspicious at all.

Lyanaz Hassan is the Lamborghini-driving, Louis-Vuitton-loving founder of her eponymous beauty brand, Lyanaz Beauty Care. Like all good “jutawan kosmetik” she is good at flaunting her wealth on social media, and also good as posing as the spokesperson for her products, in this case a range of whitening/anti-aging skincare products. 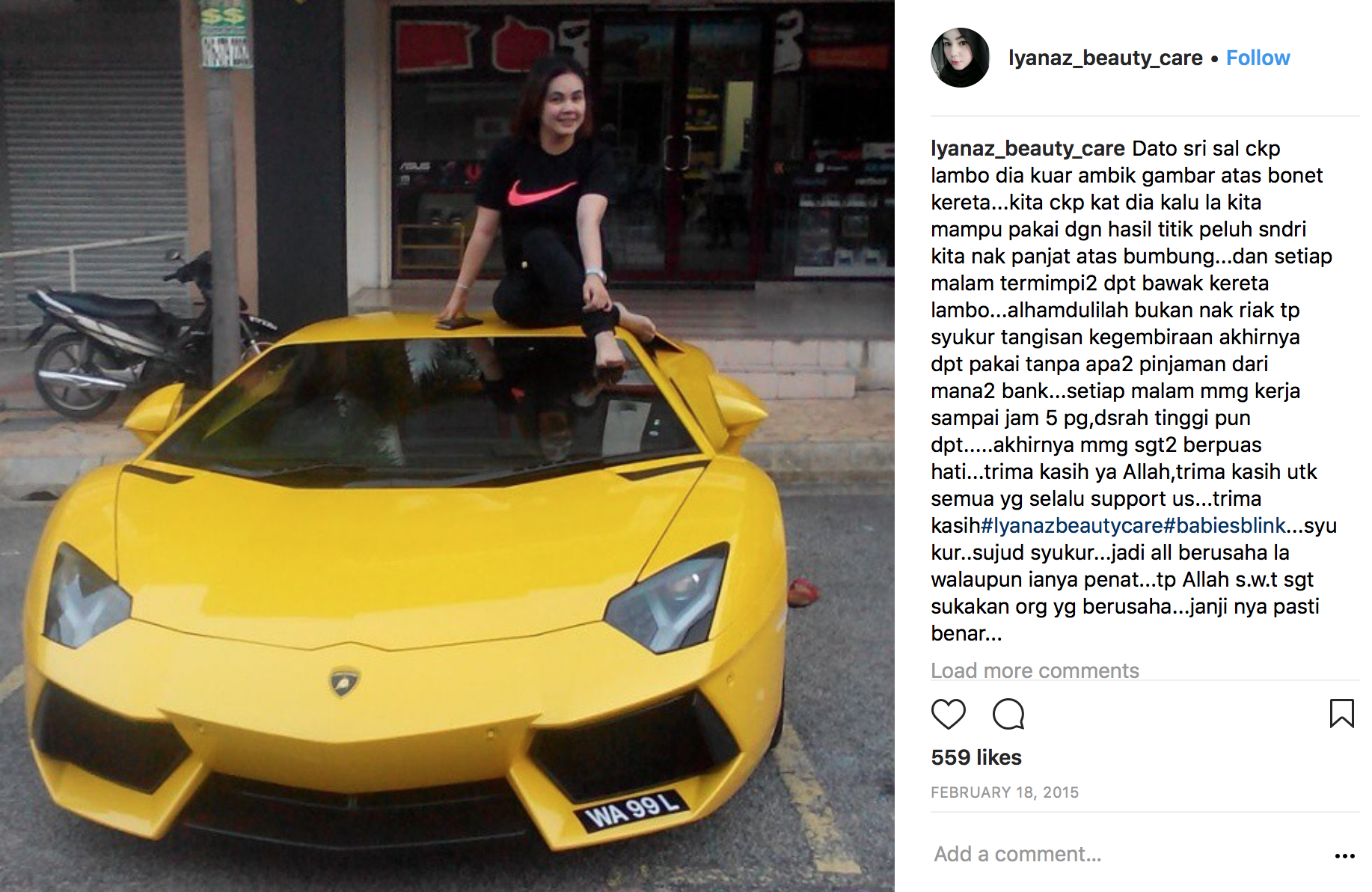 Judging by Lyanaz’s smooth, alabaster complexion, you’d definitely be tempted to buy into the promises of fairer skin in as little as 7 days, as outlandish as that may sound. Her curiously named flagship products, the “Babies Blinks” skincare line, even included a serum that touts “effects as soon as 24 hours”. The Babies Blink 5 in 1 credited this miraculous skin whitening effect to a potent mix of “milk honey, glutathione and tomato extract”, but as it turns out, Brunei’s Ministry of Health also discovered a secret ingredient in the mix: mercury.Yay!

Seriously though, mercury may whiten the skin, but it’s also really, really bad for you. A little refresher from the Bruneian Ministry of Health on mercury: “Mercury is prohibited in cosmetic products due to its hazardous effects on human health. It is readily absorbed through the skin on topical application and tends to accumulate in the body. Exposure to mercury can cause skin rashes, memory loss and muscle weakness while high exposures may result in damage to the brain and kidneys. It is also extremely toxic to unborn children.” Yup.

Since then, Lyanaz seems to have stopped producing the Babies Blink 5 in 1 (though you can still get it on Qoo10) and has moved on to selling Babies Blink Coffee (turns out “beauty coffees” are actually a popular side-hustle for cosmetic millionaires), but also Babies Viral Serum and Babies Serum Gula (Sugar Serum). And in case you are wondering, yes, you can see whitening effects in one day! Because some people just never learn? 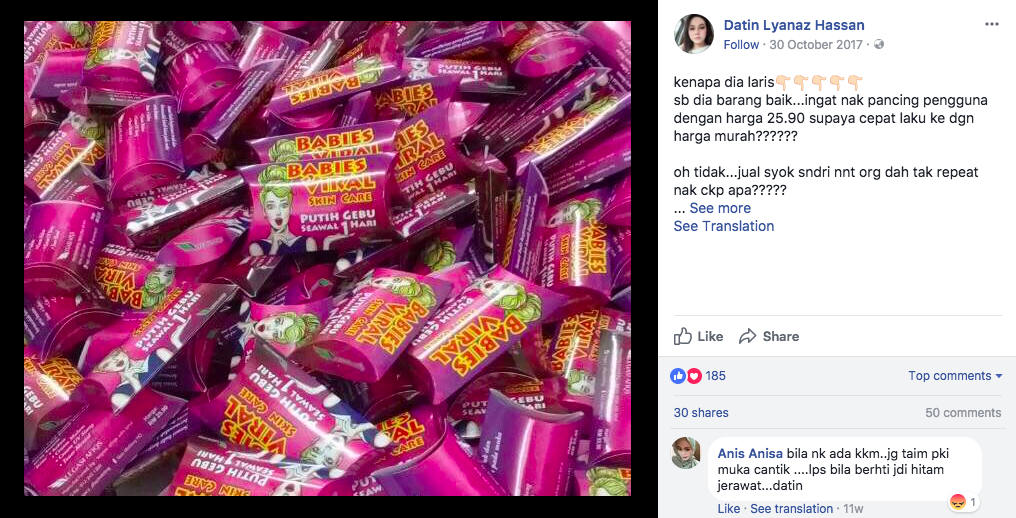 What’s extra confusing is that Babies Blinks products are also heavily imitated, which just speaks to the insane, free-for-all nature of the cosmetics industry in this part of the world. Like maybe a little bit of regulation would not be a bad thing, just saying.

Unlike the others on this list, the founders of Tati Skincare and Tati Cosmetics are pretty low-profile. (They’re still rich, though.) Collectively, they have less than 15,000 followers on Facebook, and don’t have a huge Instagram presence. But perhaps that’s a calculated move, given that one of their best-selling products contains, oh, just about 20,000 times more than the legal amount of mercury. 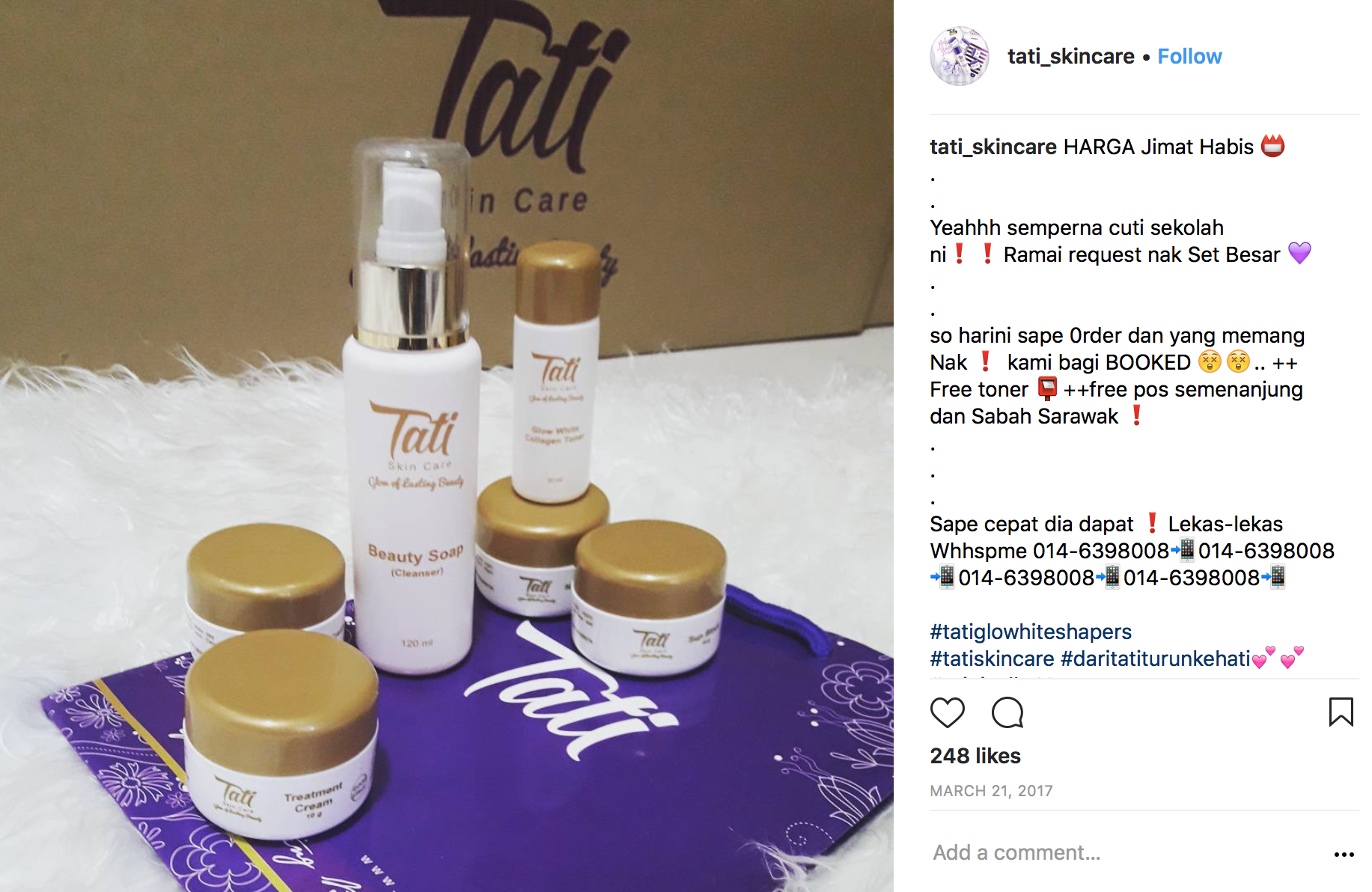 In June, Singapore’s Health and Sciences Authority found a lot of mercury in the Tati Skincare Night Cream, which is sold as part of the Tati Skincare 5 in 1 set. In the same set of products, the Tati Treatment Cream was found to contain hydroquinone and tretinoin, both of which are prohibited from use in cosmetic skincare products. Irony: all the products were labelled as “100 percent free of harmful chemicals” on their packaging.

The creams were banned in Singapore, whereas Malaysian authorities “advised consumers to refrain” from buying the offending products. At any rate, Tati Skincare continues to advertise the same 5 in 1 set that was banned in Singapore on their website (with no mention of the ban). Meanwhile, a repackaged “new and improved” version of the 5-piece set has appeared on Tati’s Facebook page. Again, the products are advertised with claims of being free from harmful chemicals, but at the same time, you know, it has “10 times the glowing effects”. So, yeah… we’re not buying it. 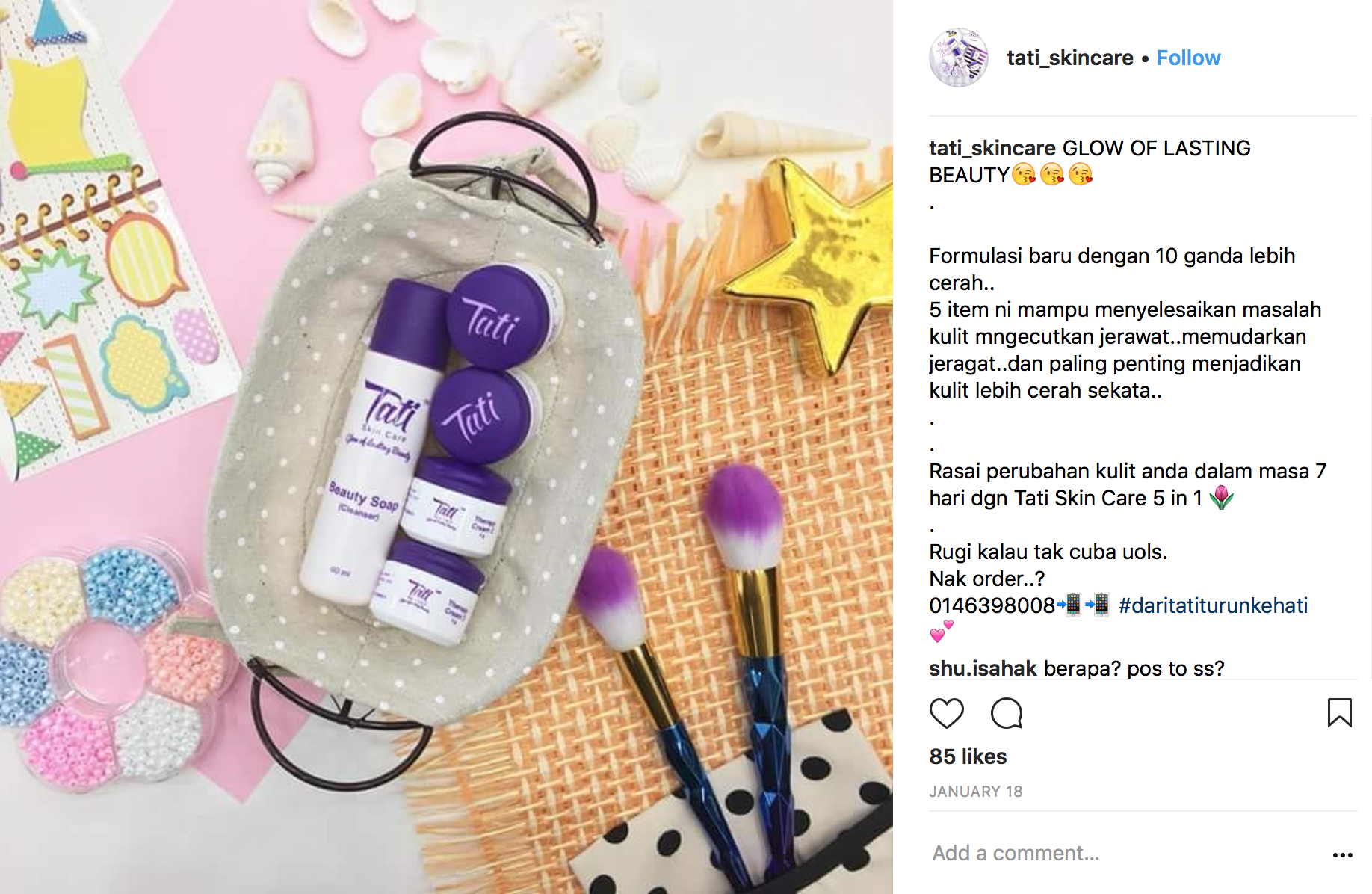 Of course, we’re all skeptics here, but the truth is there are a lot of women out there who continue to use these potentially poisonous products because… beauty. Oh, and fairness. And that’s troubling. But as much as we do blame ignorant/immoral cosmetic millionaires, how much should we also blame this almost universally-held notion that, when it comes to skin, fairer is better? Food for thought.

Ready for some deja vu? Faziani Rohban is the founder of a beauty brand. The beauty brand makes skincare products. One of its most popular products is a whitening body soap. Faziani also likes to promote her products on Instagram, where she’s pretty popular. She posts lots of heavily-filtered selfies, travel photos and pictures of herself carrying expensive bags. 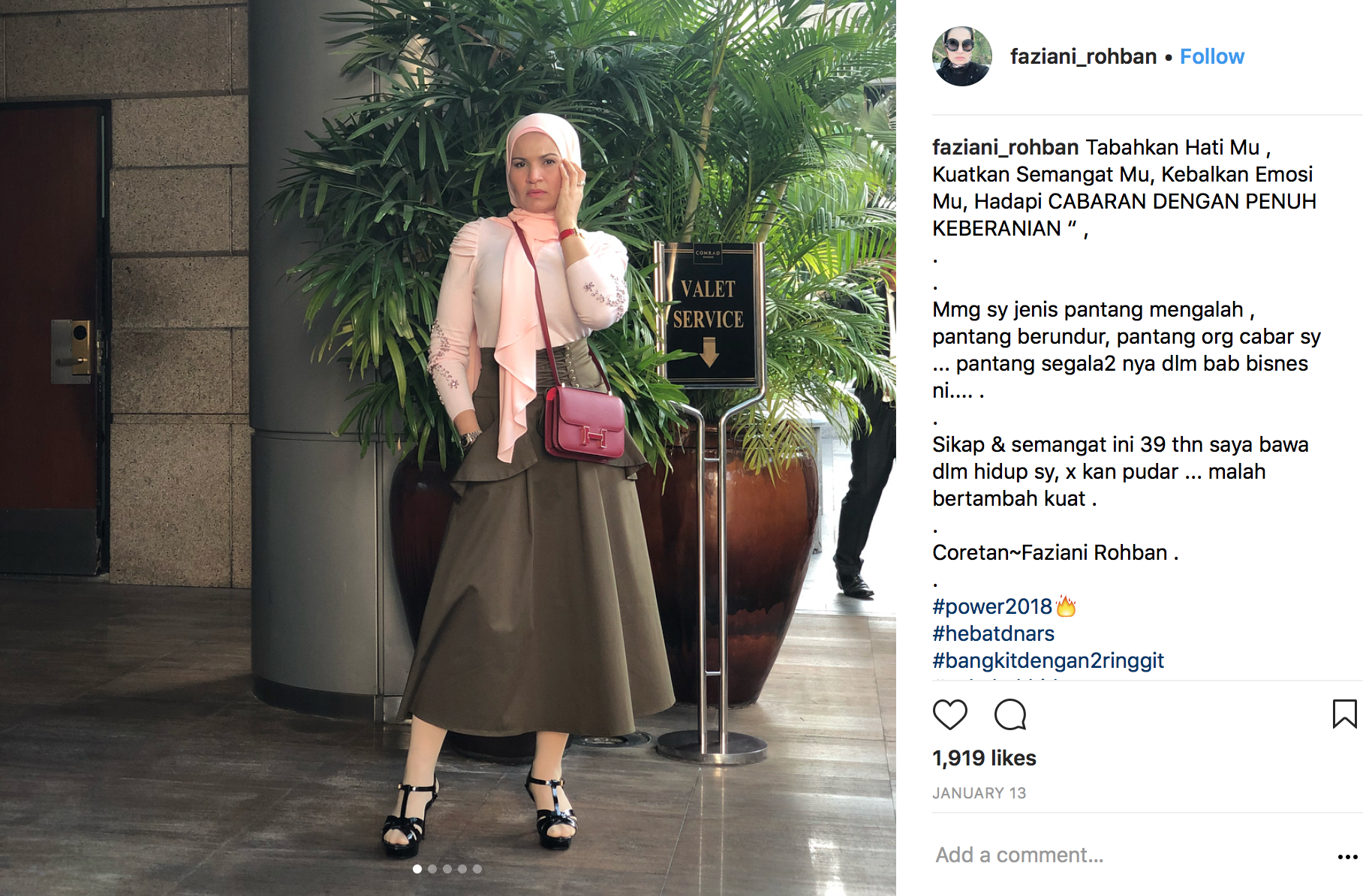 Sound familiar yet? Oh wait, don’t forget those two troublemakers, hydroquinone and tretinoin, which were both found in the Dnars “Nar” cream. By now this story is so repetitive, it’s almost putting us to sleep. Except that it’s not! It’s distressing and almost paranoia-inducing. At this rate it’s like what doesn’t have toxic chemicals in it, hmm?

And then there’s the name of her brand. Datin Faziani says it’s inspired by her daughter’s name — Irdiena — which is sweet, but we also can’t help noticing the similarity between Dnars and another well-known international beauty brand, *cough*. Basically, it’s the same name? But with a bonus fancy “D” for extra class? But, hey, on the scale of blatant rip-offs, at least it isn’t ANAS.

When it comes to the cosmetic millionaires of Malaysia, however, one is in a league of her own. When it comes to the bling, the lavish spending, the social media exhibitionism, the dodgy products, and the dubious claims of fairer skin and/or instant beauty, Datuk Seri Hasmiza Othman, more popularly known as Dato Seri Vida, is way above the rest, in all respects. 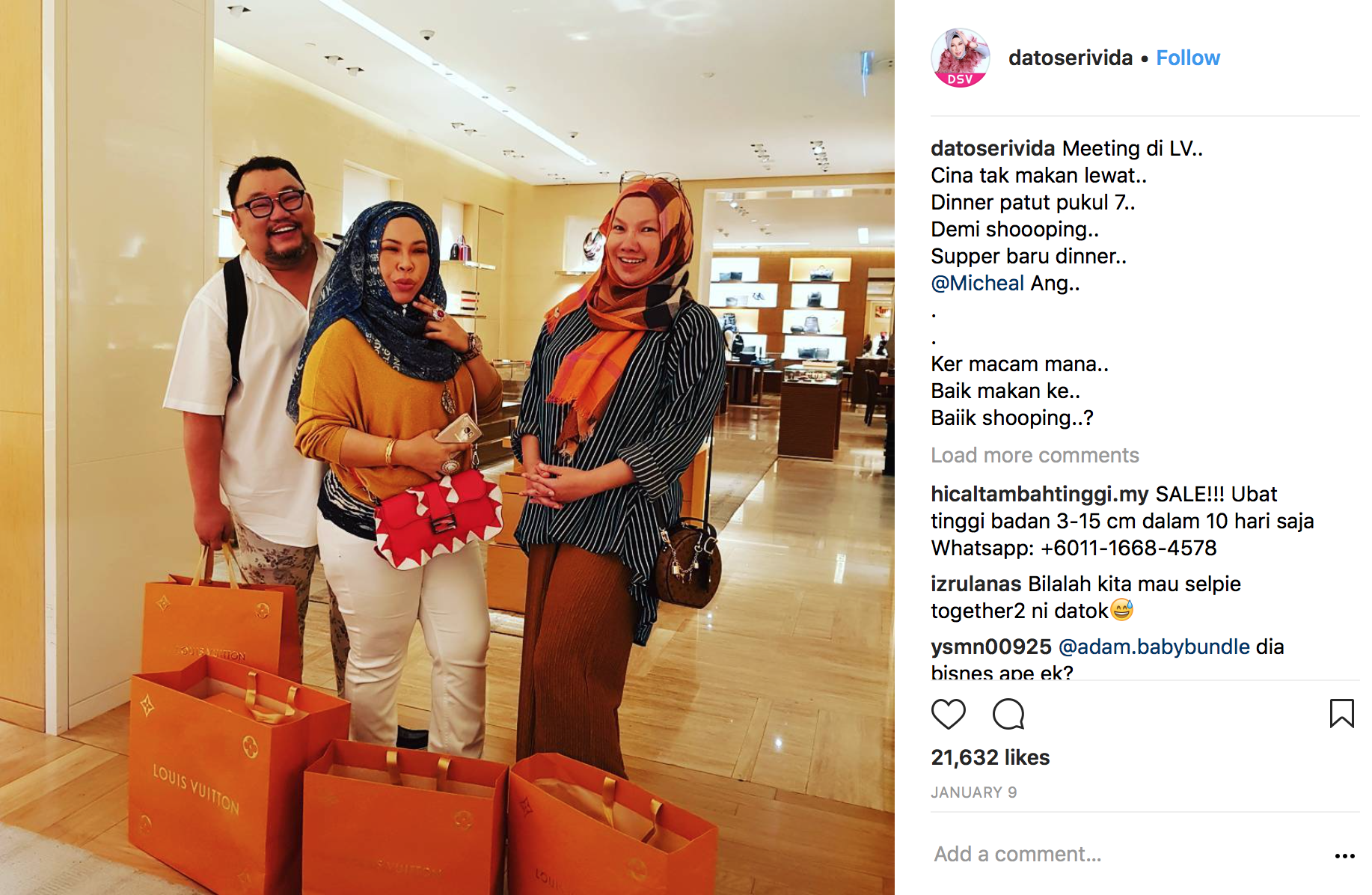 Dato Seri Vida has an epic origin story that is so weirdly gripping it deserves an entire post dedicated to her. But in brief, she is everything her competitors are, except more of the same. She has the strangely compelling charisma of Dato Aliff, although hers is more of the annoying/naggy/ditzy makcik variety. And, like him, she has translated this borderline-likeable quality to semi-stardom – in her case, she made a music video that’s been viewed more than 9 million times, and she’s sponsored her own televised singing competition, Gegar Vaganza. 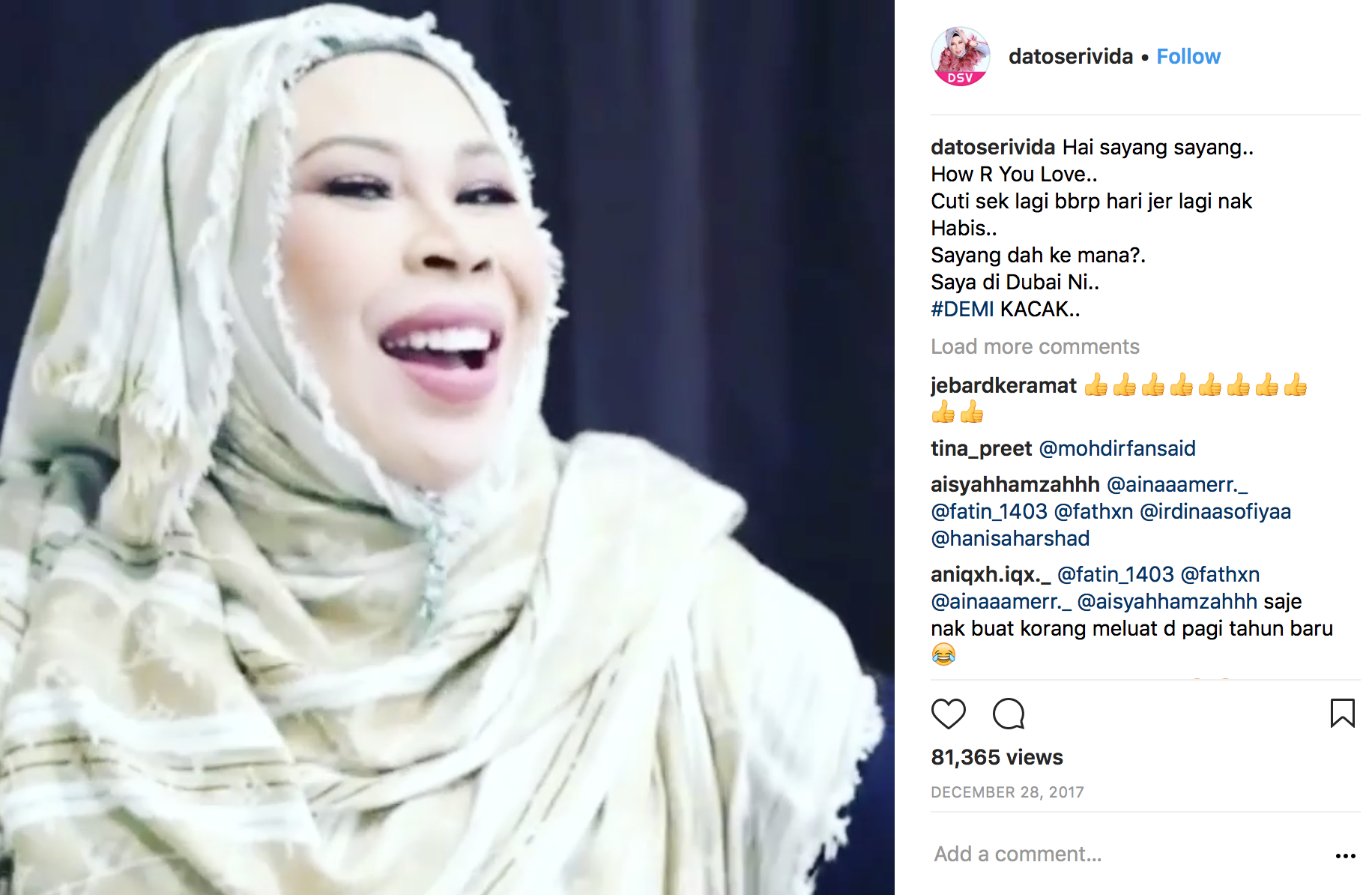 Like Lyanaz Hassan, Faziani Rohban and the ladies of Tati Skincare, Dato Vida’s business is also predominantly in whitening-related beauty products – and thanks to aggressive sponsorship deals, her whitening/brightening line QuPuteh is a household name in Malaysia. But does more fame and ubiquity translate to more reliability in terms of product quality, though? Erm, no. Both the Qu Gebu AP Krim and the Qu Puteh Whitening Pro 9 products distributed by Vida Beauty have been banned for containing excessive amounts of either mercury, hydroquinone or tretinoin. Alamak!

Then how? Well, since the Malaysian authorities don’t seem to care very much about regulating this free-for-all industry, unless consumer awareness in the domestic Malaysian market shifts drastically, the cosmetic millionaires of the land will simply continue to become more and more famous and make more and more money as time goes by.

If you think this is depressing, cheer yourself up with the best bad fight scenes in Asian cinema.